Cora Lynn is nine miles from the start of the Main Drain at Western Port Bay. Some of the towns along the drain were settled as part of the Public Works Department Village Settlement scheme. This scheme was devised by Engineer Carlo Catani in 1893 and was part of a work creation scheme that allowed unemployed married men to be given a 20 acre block of land on condition that  they work two weeks on maintaining the block and the next two weeks on paid work clearing the drains. The first settlements were at Five Mile (later Koo-Wee-Rup North) and around the fourteen mile point (at Iona) and two miles further west, so thus taking in the thirteen mile point and what became known as Vervale. I believe that Cora Lynn was not part of this Village Settlement Scheme and certainly the original block sizes along the drain near Cora Lynn were not twenty acres but, according to the Parish Plan, sixty acres to the west of Cora Lynn and from 40 acres to 80 acres to the east. They were taken up from around the mid 1890s.

The first evidence I can find for the age of the Cora Lynn township was 1904 as the township plan shows some blocks having been purchased in that year. Other land sales took place later and I found an advertisement for sales of township blocks in The Argus of October 5, 1909.

The Cora Lynn State School opened in January 1907 and was originally called Koo -Wee-Rup Central. The Cora Lynn store was opened by George Petrie Murdoch Junior in 1907, and a post office opened on July 1, 1907 and this prompted the Cora Lynn Progress Association to request a name change for the area, and thus Cora Lynn was adopted. This began a period of growth for the town. The community soon held social activities, such as dances, in the shelter shed at the school. This was obviously inadequate and in April 1910 a meeting was held for the purpose of establishing a Mechanics’ Institute and Library at Cora Lynn. At the same time euchre parties and dances were held to raise money to clear the recreation reserve - in July 1910 over 100 people attended such a function.  In either December 1910 or January 1911 the Cora Lynn Cheese factory opened.  A branch of the London Bank (later taken over by the E.S & A bank) opened in a small building next to the General Store around this time (perhaps in response to the establishment of the Cheese Factory?) 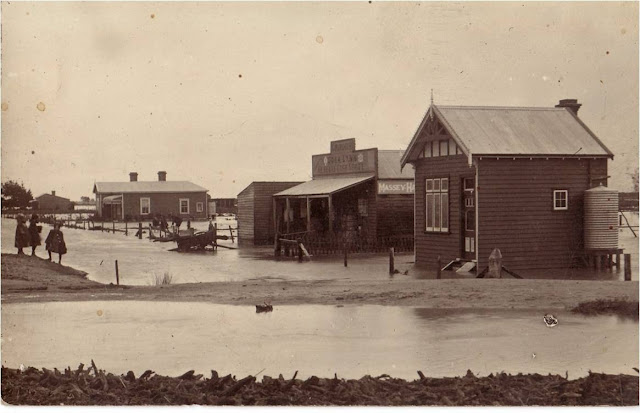 Cora Lynn, maybe 1911. The small building on the right is the Bank, next to it is Murdoch's store.

However, all this progress had a down side as the South Bourke and Mornington Journal reported in August 1910 – the Cora Lynn Progress Association has complained of the excessive speed at which motor cars and bicycles are being driven through the shire on the narrow roads and several  persons had experienced very narrow escapes from accidents.

By 1910, the School numbers had increased so much that students had to be taught in the shelter shed. Cora Lynn led the way in February 1911 when the parents of the school had the distinction of appointing the first School Committee in the State. This Committee replaced the old Boards of Advice. The Minister for Education praised the Cora Lynn School Committee for the superior report that they had submitted according to an Argus report on February 10, 1911.

The Cora Lynn hall, called Keast Hall was named after William Keast (1866-1927). Keast was the Member of the Legislative Assembly for the area from 1900 to 1917. This hall was to be opened on June 13, 1911 but the official opening was delayed due to the fact that three feet of water was running through the hall, one of the many floods to hit Cora Lynn. I am unsure when the official opening then took place, but there is a report of the Berwick Shire Council meeting held in early November 1911 which gave approval from the Board of Health for the opening of the Mechanics’ Institute at Cora Lynn, so it is possible that the opening was delayed a few months due to repairs after the flood. The original building would have been fairly basic as a concert was held in June 1917 to raise money to line the hall. The community had held various functions over the years for the hall including a skating night in July 1914.


Other town activities included sports gatherings held on the newly cleared recreation reserve and in January 1915 a Cora Lynn branch of the Victorian Potato Growers Association was formed.  On April 15, 1916 the first Cora Lynn Horticultural show was held. It was opened by Mr Keast, who was introduced by the Show President, Mr W.J Johnston, and the event was held in his ‘own’ hall. Mr Keast said the show was a natural display of the fertility of the district and the industry of the tillers of the soil.  The report in the South Bourke and Mornington Journal of April 27, 1916 said the display of goods was highly creditable and it went on to say that the ladies, without whom a exhibition would be a failure, pleased the eye by their gorgeous display of fancy work and literally caused the mouth to water by the appearance of preserves, confectionary and the many tempting objects they alone know how to produce.