This interesting account of  a Bunyip appeared in the South Bourke and Mornington Journal, 100 years ago, in February 1913. 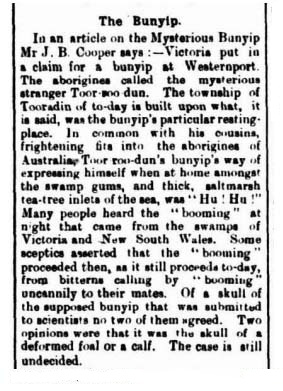 Posted by Heather at 8:12 PM No comments:

100 years ago this week - the state of the drains

This was in the The Argus, 100 years ago this week, in February 1913. 100 years on, local residents are still concerned about the state of the drains, so no change there.  It's a bit hard to read, so I have copied the text, below. 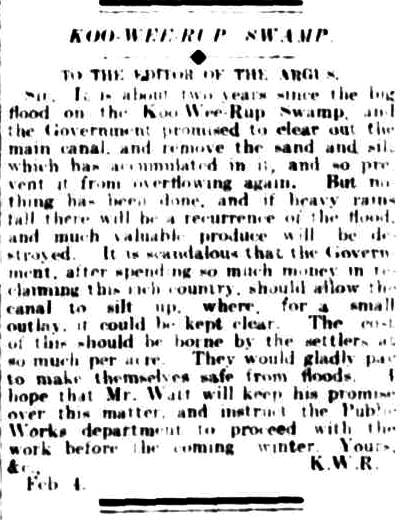 
Sir, It is about two years since the big flood on the Koo Wee Rup Swamp and the Government promised to clear out the main canal and remove the sand and silt which had accumulated in it and so prevent it from overflowing again. But nothing has been done and if heavy rains fall there will be a recurrence of the flood and much valuable produce will be destroyed. It is scandalous that the Government, after spending so money in reclaiming this rich country, should allow the canal to silt up, where for a small outlay, it could be kept clear. The cost of this should be borne by the settlers at so much per acre. They would gladly pay to make themselves safe from floods. I hope that Mr Watt will keep his promise over this matter and instruct the Public Woks Department to proceed with the work before the coming winter.
Yours etc    K.W.R  Feb 4