A three day horticultural show was held at St Thomas' Church of England in Bunyip, 100 years ago this week in December 1913. It raised fifty five pounds which went  towards building the Parsonage. The church was opened on December 28, 1902 and the Parsonage opened in June 1915. 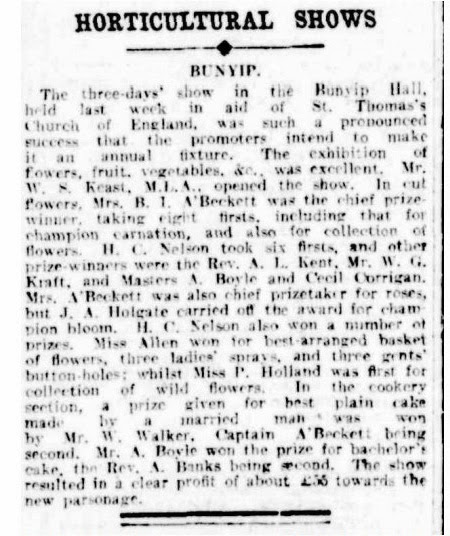 Mrs Beatrice A'Beckett won eight first prizes, including that for champion carnation, roses and a collection of flowers. Amongst the other prize winners was Horace Nelson, listed in the Electoral Roll as a farmer from Bunyip; the Reverend Kent; William Kraft, who with his wife Sarah, ran the Gippsland Hotel in Bunyip. Their son, William, later became the manager of the Drouin butter factory. Another winner was  Joseph Holgate, store keeper of  Bunyip, who won the champion bloom. A couple of lads, A. Boyle and Cecil Corrigan  also won some prizes.  Miss Allen won a number of prizes for best arranged basket, ladies sprays and gents' button-holes. Miss Allen doesn't have  a first name or initial listed, so I don't know who she was; Miss P. Holland won the prize for wild flowers, but she wasn't in the Electoral Roll in 1914.

In the cookery section, Mr William Walker won the 'best plain cake made by a married man. He is listed in the Electoral Roll as a hairdresser of Bunyip. Captain Arthur A'Beckett, came second in this category - he was the husband of the prize winning Beatrice. Mr A. Boyle won the prize for the batchelor's cake. There is a Frederick and Elizabeth Boyle listed in the Electoral Rolls (Frederick is listed as carpenter) so perhaps they are the parents of Mr A. Boyle and the lad, Master A. Boyle who won prizes. The Reverend Banks won the second prize in the bachelors division.
Posted by Heather at 7:16 PM No comments: