100 years ago this week - Gay life at Garfield 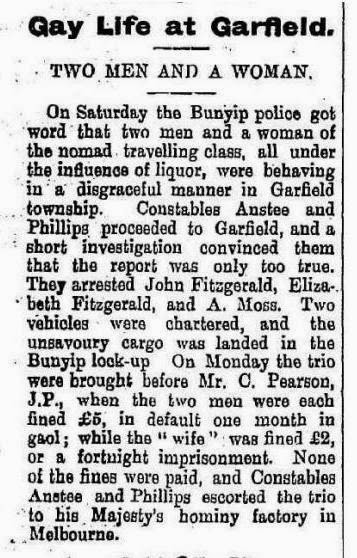 100 years ago this week - from the Bunyip Free Press of February 14 2014 , under the headline Gay Life at Garfield there is a report of two men and a woman who were behaving in a disgraceful manner in the Garfield township. The Bunyip Police travelled to Garfield and found that the reports were true, so they arrested John and Elizabeth Fitzgerald and a Mr Moss. The police chartered two vehicles and transported the unsavoury cargo to the Bunyip lock-up.

At a subsequent court appearance, both men were fined £5 or ones month’s imprisonment and the ‘wife’ was fined £2 or a fortnight’s imprisonment.  As the trio were all of the nomad travelling class they couldn’t afford the fine so they were sent to His Majesty’s hominy factory in Melbourne.

I had never come across the term hominy factory before; it means prison as apparently hominy is a slang word for prison food; hominy being a thin gruel or porridge made from cornmeal.

http://trove.nla.gov.au/newspaper
Posted by Heather at 6:35 PM No comments: