Drainage of Bunyip - 100 years ago this week

Here's an interesting article about drainage (or lack of it ) in Bunyip. The drain went from the Hall, along Main Street to the Railway Hotel and the Hotel's urinals emptied into it and the householders also emptied all their 'bedroom and other slops' into it. Ah, the good old days - very smelly!

Posted by Heather at 7:48 PM No comments:

Email ThisBlogThis!Share to TwitterShare to FacebookShare to Pinterest
Labels: 100 years ago this week, 1914, Bunyip

100 years ago this week - Miss Bell, confectioner, fruiterer and caterer.

Feeling peckish? Then call in at Miss Bell's shop in Main Street in Bunyip and you can purchase "hot pies, tea, coffee and cocoa at all hours". You could have done this 100 years ago, as well as buying confectionery, postage stamps and many brands of cigarettes and tobacco. Miss Bell would also hire out crockery, glassware, cutlery and  a marquee for your party. 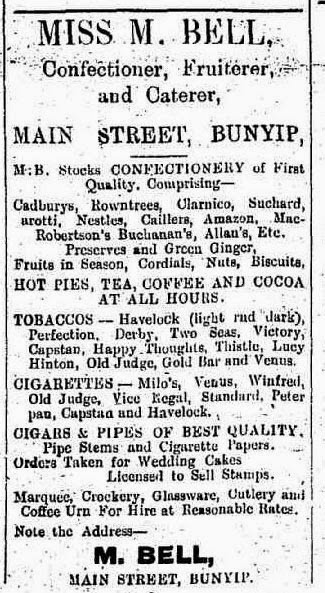 We have met Miss Bell before, In January 1913, she applied to the Shire of Berwick for a permission to manufacture ice cream on her premises. We know from the Electoral Roll on Ancestry database that her name was Margaret. There is a report  of her wedding in the Bunyip Free Press of July 30, 1914 when she married Charles Marsden of Bunyip. Her father is listed as Hugh Bell, a farmer of Bunyip. The wedding took place on July 22 at St Thomas' Church of England in Bunyip and the reception was at the Cafe Cecil 'of which the happy couple are the proprietors' according to the article. I don't know if this was a different premises from her own business, because she was still paying for advertisements in the paper months after she was married, or the same business.

What else do we know about Margaret Bell, confectioner? Cafe Cecil was still going in December 1915 as it was supplying the catering for Sports Day.

In the same paper there was also an account of another wedding, that of Arthur Weatherhead to Inez Coombs and they had their wedding reception or 'sumptious wedding tea' at Cafe Cecil after their wedding on November 11, 1915. This was of interest to me as Arthur, the fourth child of Horatio and Eleanor Weatherhead, was my grandmas's brother.  Grandma is Eva Rouse (nee Weatherhead)

100 years ago this week - Patriotic Concert

Here's an account of a Patriotic Concert held at Koo-Wee-Rup on October 30, 1914.  The school children put on the concert, well trained by Mr and Mrs Eason and Mrs Morrison. Lots of familiar Koo-Wee-Rup names mentioned including  Colvin, Hudson, McNamara, Johnson and Mickle.