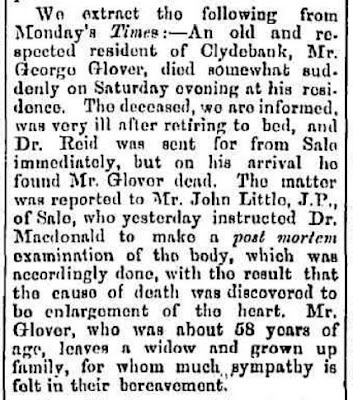 We extract the following from Monday's Times:-An old and respected resident of Clydebank, Mr.George Glover, died somewhat suddenly on Saturday evening at his residence. The deceased, so we are informed, was very ill after retiring to bed, and Dr. Reid was sent for from Sale immediately, but on his arrival he found Mr  Glover dead. The matter was reported to Mr. John Little, J.P., of Sale, who yesterday instructed Dr Macdonald to make a post mortem examination of the body, which wasaccordingly done, with the result that the cause of death was discovered to be enlargement of the heart. Mr. Glover, who was about 58 years of age, leaves a widow and grown up family, for whom much sympathy is felt in their bereavement. 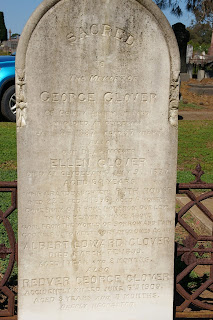 This is George and Ellen (nee Dugan) Glovers grave in the Sale Cemetery. Also buried in the grave are their grand daughters Ruth, who is listed on the stone and Annie, who is not listed. 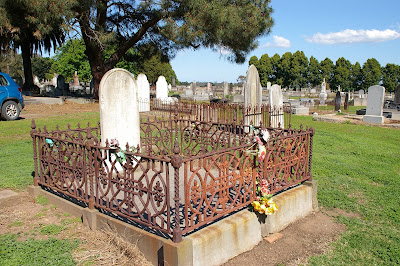 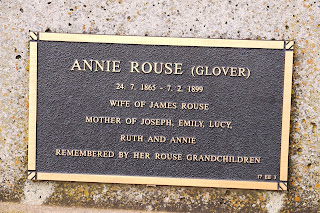 This is Annie Rouse's grave, she had no head stone for decades until her grand children erected one about 20 years ago. 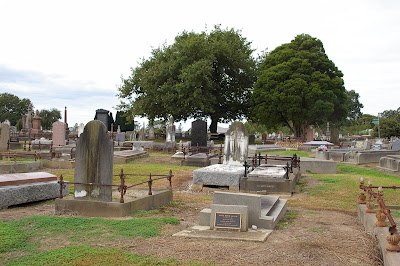 Annie's grave at the front, at the Sale Cemetery

Posted by Heather at 7:51 PM No comments:

This is an obituary of  Ellen Agnes Weatherhead, daughter of Ellen (nee Ramsdale) and Henry Fortescue Weatherhead, thus my great, great Aunt. Henry is incorrectly called Horatio in this article. Ellen died July 28 1941 aged 77. You can read the full obituary here http://nla.gov.au/nla.news-article214604529 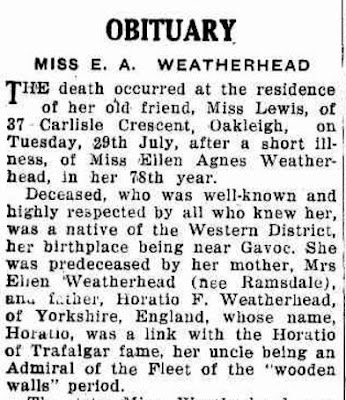 The death occurred at the residence of her old friend, Miss Lewis, of 37 Carlisle Crescent, Oakleigh, on Tuesday, 29th July, after a short illness, of Miss Ellen Agnes Weatherhead, in her 78th year. Deceased, who was well-known and highly respected by all who knew her, was a native of the Western District, her birthplace being near Gavoc. She was predeceased by her mother, Mrs Ellen Weatherhead (nee Ramsdale), and father, Horatio F. Weatherhead, of Yorkshire, England, whose name, Horatio, was a link with the Horatio of Trafalgar fame, her uncle being an Admiral of the Fleet of the “wooden walls” period

The late Miss Weatherhead was  the last surviving member of a grand old English family, her brother John having by great foresight, established a butter and cheese industry. Other relatives included her brother, Mr Horatio William Weatherhead, late of Tynong, an engineer and saw-miller, Mr Harry Weatherhead, of Western Australia, and her sister Mary, late of Naringal, with whom deceased at one time carried on a fertile farm near Warrnambool. Their painstaking and advanced methods achieved for them a reputation for excellence of produce and prize-stock that was the envy of many masculine district farmers. In addition, like many of her period, the late Miss Weatherhead was an accomplished needlewoman and equestriene. Her nephew, Mr Arthur Weatherhead, of Tynong, who is well-known in the Dandenong district, arranged the funeral, which took place at the Spring Vale Cemetery. Deepest sympathy is extended to her sorrowing relatives in the loss they have sustained. The remains were privately interred in the Presbyterian section, the Rev. T. C. L. Goble conducting the service at the graveside.

Posted by Heather at 7:44 PM No comments:

This is an announcement of the death of my great great grandmother, Ellen Weathernead (nee Ramsdale) who died October 23, 1903. Her husband was Henry Fortescue Weatherhead, who died December 5, 1866 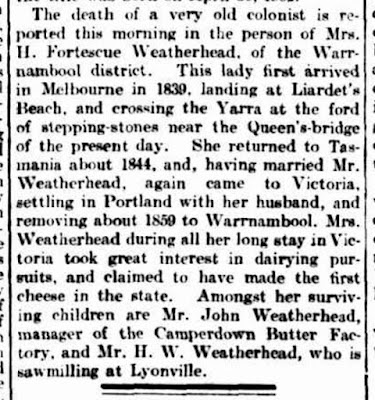 The death of a very old colonist is reported this morning in the person of Mrs H. Fortescue Weatherhead of the Warrnambool district. This lady first arrived in Melbourne in 1839 landing at Liardet's Beach and crossing the Yarra at the ford of stepping stones near the Queen's bridge of the present day. She returned to Tasmania about 1844 and, having married Mr Weatherhead, again came to Victoria, settling in Portland with her husband and removing about 1859 to Warrnambool. Mrs Weatherhead during all her long stay in Victoria took great interest in dairying pursuits and claimed to have made the first cheese in the state. Amongst her surviving children are Mr John Weatherhead, manager of the Camperdown Butter Factory and Mr. H. W. Weatherhead, who is sawmilling at Lyonville.

According Ellen's  Death Certificate, her occupation was Dairywoman, she was born in Yorkshire. Her father was John Ramsdale. She spent  5 years in England, 11 in Tasmania and 64 in Victoria. She was married at the age of 24 in Launceston to Henry, she was buried at the Warrnambool Cemetery and her children on the death certificate are listed as - Elizabeth Sarah (deceased), John Stroyan 53 years old, Thomas deceased, Horatio William 50 years old, Henry Graham 48 years old, Alice Jane deceased, Mary Emma 44 years old, Eliza Esdaile deceased, Ellen Agnes 40 years old and Albert Esdaile deceased.

Ellen left George Town on October 20, 1839 on the Henry according to the Tasmanian Archives site (see it here) and it is reported in Cornwall Chronicle of October 19, 1839 (a Launceston paper). She was only 17 years old.

Posted by Heather at 7:58 PM No comments: