When my father, Frank Rouse, was young - around 17 to 19 years of age in the early 1950s, he was a member of the Repertory Society or Dramatic Society in Bunyip. The Company put on plays at the Bunyip Hall and the Cora Lynn Hall.  The plays were usually two acts long, with an interval. Dad doesn’t remember the names of any of the plays but in one play he played the role of an English gentleman on a train who kept getting off the train at the wrong station and in another he played the role of a Minister of Religion.

The Society had maybe 15 to 20 members who also made the stage sets; Dad built the train for the train play.

His acting career started largely because he had the essential attributes of being young, male, tall and willing. Another member of the Society was Win Reid who taught Dad at Sunday School at Cora Lynn and she organised the Sunday school concerts and also taught elocution and encouraged Dad to join the Repertory Society. It was a short lived acting career which was fun while it lasted and he still remembers the advice he was given which was ‘to speak to the back row, so your voice carries’

Other members of the Society were Hughie Pound who ran the Radio store in Bunyip, where Loretta’s Hairdressing is now located; Colin Flett who had  a general store, with a good range of hardware, where the Bendigo Bank is; Frank Harker who lived on the Eleven Mile at Cora Lynn (all that remains of his house are the two palm trees in the paddock); Don and Pat Whysall – Don was in the Fire Brigade and Pat was a teacher; Betty Storey who lived on Murray Road, a neighbour of the Rouses; Dad’s oldest sister Nancy; Nelly Dixon (nee Edis) married to Geoff Dixon, who was a builder; Russell and Elizabeth Spence  - remembered as ‘an older couple’ and Arthur Holgate, who was ‘quite old’. Mr Holgate was the local Registrar of Births and Deaths and is remembered in our family because he incorrectly registered the date of my sister Megan’s birth in February 1957. He wrote the registration date down as the birth date and we didn’t find out until she had to apply for a birth certificate 20 or so years later.

Denise Nest has a paragraph about the Dramatic Society in her book, The Call of the Bunyip: history of Bunyip, Iona and Tonimbuk 1847 to 1900..  She mentions a few other names apart from the ones Dad remembers - Rex Taylor and members of the Thomas and Roberts families.
Posted by Heather at 7:22 PM No comments:

Bunyip and the Koo-Wee-Rup Swamp 1887

This account of the township of Bunyip and the Koo-Wee-Rup Swamp comes from the South Bourke and Mornington Journal of August 3, 1887.  Click here to access this article on Trove

From an occasional Correspondent.

"Vare iz de downsheep" The interrogator was a foreigner, and the person questioned was, Mr. Barrow, the local storekeeper of the "rising" township of  Bunyip. For Bunyip, by the way, is at present only a small hamlet; in fact it is able to do very little more than 'claim to have, a ''local habitation" as well as a name. Nevertheless it has two hotels, well conducted by Messrs. Hanson and Finch. These two hostelries, with Mr. Barrow's general store, amicably uniting themselves pretty well form the township. There are also one or two unpretentious dwelling houses about, and a State School, of which Mrs. Skinner is the tutelary genius, lies back a little out of sight.

But still Bunyip may be designated as a rising township, for it stands prominently upon a steep "rise" overlooking the great Koo-wee-rup Swamp. To the foreigner's enquiry, "vare iz do downsheep," the interrogated resident replied with a majestic and comprehensive sweep of the hand, which took in the whole of the vast municipal settlement, "it is here." The foreigner looked puzzled and gazed earnestly round the whole sweep of the horizon, and then a bright idea penetrated his befogged intellect. "Oh! over de hill" he said, and was about to rush on thitherward to seek the goal of which he was in quest; but he was intercepted in his intention by the resident, who rejoined-"No; here. This is the township. Circumspice!"  It was calculated to wound the civic patriotism to have thus with minute emphasis pointed out the locality in which one lives, but there is nothing for it but to remit it to the category of "another injustice to poor old Ireland," and Bunyip must bear its trials with what heroic fortitude it can. 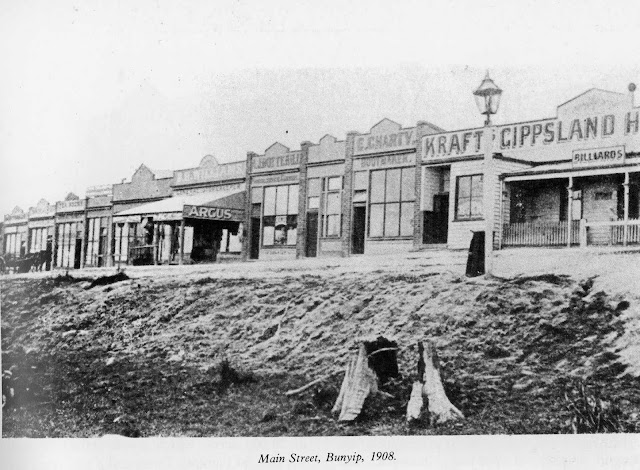 I don't have any photos of Bunyip from 1887, but this is the Gippsland Hotel (Top Pub) and Main Street in 1908.
Photograph from The Call of the Bunyip by Denise Nest.

It was only the other day that a young lady in a passing train, looking out over the dreary stretch of Koo-wee-rup Swamp with its forest of dead timber, expressed somewhat emphatically, if not euphoniously, the opinion that this was the last place the Creator made, and was left unfinished by Him. But then the day was a gloomy one, and the prospect from the train was not enlivening. Had the critic been able instead to have stood on the summit of the hill on which the township stands, on a bright day and have seen the magnificent view of the Cannibal ranges, and a sweep of mountain scenery right away to the snow-covered Baw Baw; and again, out over the Koo-wee-rup Swamp, the hills and the sea (ships being sometimes even discernable to the naked eye) had this opportunity been afforded to the fair critic, she would doubtless have been less severe in her comments. More than this, had she been gifted with prophetic, not to say poetic, vision she would have had presented to her mind's eye a still more attractive picture, when the now dismal-looking Koo-wee-rup Swamp shall be moved by the industry of the husbandman, and picturesque homestead with beautifully verdant fields shall gladden the eye and heighten the beauty of the even now splendid panorama.

And this enhancement of the beauties of the locality should not be hidden in the very far distant future, and that some are far-seeing enough to perceive that this is evident from the fact that at a recent sale of Bunyip land lots at the outside boundary of the suburban area realised as much as £6 per acre. During his election tour Dr. L. L. Smith pledged himself to get the reclamation of the Koo-wee-rup Swamp entered upon as one of his first Parliamentary works, but the hon. gentleman substituted a trip to England, and since his return has forgotten to redeem his promise. But the work is one which must inevitably be undertaken before very long, for such a splendid tract of richly fertile country cannot long be allowed to lie waste within so short a distance of the metropolis. Here is a direction, Mr.Editor, in which your pen, so long wielded in advocacy of the interests of this district, might usefully be exercised. Meanwhile Bunyip is dependent for its existence upon the firewood trade. In a small place like this little can be expected in the way of social news. The arrival and departure of mails and trains constitute the excitements of the place.

Posted by Heather at 7:15 PM No comments: