The Argus newspaper, which is available on-line on the National Library of Australia website http://newspapers.nla.gov.au  started in 1848 , so I thought it would be interesting to see when Koo-Wee-Rup had its first press mention. The earliest report was July 1, 1856 however in October 1868 I found the first mention of a racehorse called Koo-wee-rup, so I thought I would tell you about the horse.  The horse’s name was usually spelt as Koo-wee-rup, so that’s the way we will spell it. The horse was owned by Mr L.O Patterson. I can’t find a connection with Alexander Patterson, who was the owner of St Germains at Clyde and one of the original members of the Cranbourne Road Board, but I wonder if there is a connection, given the name of the horse.  Alexander Patterson mainly bred draught horses and his horse, Sprightly, won the silver medal for the ‘Colonial Bred Entire Draught Horse’ at the Port Philip Society’s Show in 1856. Alexander also had a few racehorses. Getting back to Koo-wee-rup, the horse was entered in the Maiden Plate on the first day of the Victoria Racing Club’s Spring Meeting which was held on Thursday to Saturday, November 5-7, 1868.  The Maiden Plate was for three year olds, over a mile and a half. A report of the race described Koo-wee-rup, like the majority of Touchstone’s progeny, appeared small and weedy. In the end, Palmerston won the race with Koo-wee-rup, who threw his rider directly the flag fell, bringing up the rear.

In March 1869, Koo-wee-rup was entered the Helter Skelter Stakes of the Victorian Racing Club’s Autumn Meeting, which he won by half a dozen lengths in a canter.  The horse was then sold to Mr Clarke for £41. Clark entered Koo-wee-rup in the Woodstock Races in May  1869 and he was the favourite to win the District Plate until it oozed out that a protest had been lodged against him on account of his owner not residing within a radius of fifteen miles of the district. The horse won and the stewards reserved their decision until a future day.

In November 1870, Koo-wee-rup was entered in the Footscray Plate on Derby Day. His Royal Highness, The Duke of Edinburgh (Queen Victoria’s son) was in attendance on the day. According to The Argus Koo-wee-rup was the first to show in front [and]…at the Abattoirs Koo-wee-rup again took the lead…coming into the Straight Koo-wee-rup was still leading, the others being close up, and  the whips being plied freely in all directions. The Dane came to the front soon after passing the turn and won with comparative ease, Koo-wee-rup being second.  Koo-wee-rup’s owner lodged a protest against The Dane for a cross coming up the Straight but the Stewards dismissed the protest.

In March 1871, at the Geelong Races the day’s sports wound up with a hack race, for which seven started. The first heat was won by Koo-wee-rup. In late November 1871 at the Ballarat Turf Club Spring meeting Koo-wee-rup was one of five starters in the Scurry Stakes and won with the most ridiculous ease, 20 lengths in front of Stafford. The horse was afterwards disqualified for being 4 pounds underweight.   On December 15, of the same year, Koo-wee-rup won the Stewards Cup at the Talbot Races, beating six others and was later sold for £42 to Mr P. Glenister.  The final mention I could find of Koo-wee-rup was at the Croxton Park Race meeting on Boxing Day, 1871. The horse was entered in the Selling race and later at the same meeting entered in the Flying Handicap, a one mile race. The betting was 5 to 2 against the horse and at the bottom of the hill Koo-wee-rup fell and broke his leg. Sadly, an unhappy ending for Koo-wee-rup.
Posted by Heather at 4:46 AM No comments:

Vervale is a little known town or locality between Cora Lynn and Iona. I grew up in Vervale, although I often say Cora Lynn, because no-one has heard of Vervale. Most people haven't heard of Cora Lynn either, but it's slightly more well known. The Shire of Berwick Rate Books give us some idea of the development of Vervale. Ratepayers in the area were listed as living in Cora Lynn or Iona until 1916 when some of these same ratepayers had Clarke’s Post Office as their address. This had changed to Vervale in 1917. The area was also known as Kirwan’s after John Kirwin, who established the Post Office in 1907. Vervale was first written as Vere Vale. Vervale means “green valley”, a bit  ironic as  it is just flat Swamp land. 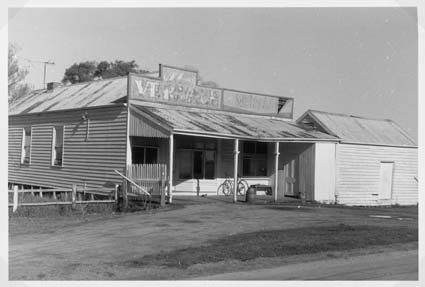 Vervale also had a State School, and although it had three names it was never called Vervale. State School No. 3201 was established in 1894 as Koo-Wee-Rup North School, changed its name in 1899 to Bunyip South and changed its name again in 1905 to Iona. The School closed December 1993.

However, Vervale does have one claim to fame as it was the first place in Victoria in which asparagus was commercially grown. Thomas Roxburgh, who was a Shipping Agent, planted the first commercial crop of asparagus at his farm on Fallon Road,  Cheriton Park, though locally it was referred to as Roxburgh Park. The earliest reference I can find to this planting is an article in The Argus from May 8, 1912, page 6.

It's a bit hard to read - so here's what it says.   Asparagus Culture.  Bunyip, Tuesday. - Mr Roxborough, an enterprising resident of Melbourne, who owns land on the Koo-wee-rup Swamp, has grown nine acres of asparagus at Iona, and a jam company has offered to erect a canning factory on the land if he grows 20 acres.

The jam company, was, I presume A.J.C., as the farm was later called the A.J.C farm. Even though it says Iona it was really Vervale, but as I said before, Vervale  wasn't used as a name until about 1917.
Posted by Heather at 6:38 PM No comments:

This is a short history of the various institutions in the town of Koo-Wee-Rup.

Schools
The first School was established in 1884 between Koo-Wee-Rup and Bayles (at Bethunes Road) with 22 pupils. It was known as the Yallock School, until 1903 when the name was changed to Koo-Wee-Rup. In 1910, the school moved to Rossiter Road (to the Secondary College location) and a new building was built in 1915. In 1953, the Higher Elementary School was completed. This School included both primary and secondary classes (Forms 1 to 3 or Years 7 to 9). The School became a High School in 1957 and shared the building with the primary school students until November 1960 when the Primary School opened in Moody Street.  St John the Baptist Catholic School opened in 1936. 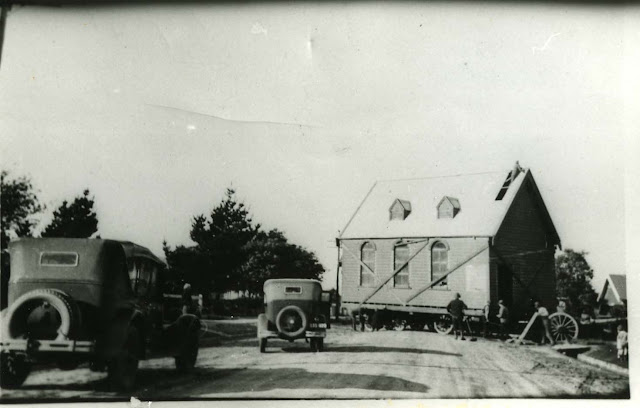 The arrival of the Methodist Church in 1932.
Koo-Wee-Rup Swamp Historical Society photograph.

Churches
In 1896, the first service took place in the Presbyterian Church, which is still standing today. The first Catholic Church was built in 1902 and the current church dates from 1962.  The Anglican Church was built in 1917 and closed in 2012 and the congregation moved to the Uniting Church.  The Methodist Church (now Uniting) was moved from Yallock to Rossiter Road in 1932. It is shown in the photograph, above. In 1978 this building was moved to a camp in Grantville and a wooden church, the Narre Warren East Uniting Church, was relocated to the site, it was given a brick veneer and a new hall added and opened on February, 3 1980.

Health
A Bush Nursing hospital was built in 1910. In 1923 the Memorial Hospital opened in Station Street and moved to a new building in  Rossiter Road in 1955. In 1946, the Infant Welfare Centre was opened in a room at the Memorial hall and in 1953 the Pre-School opened. 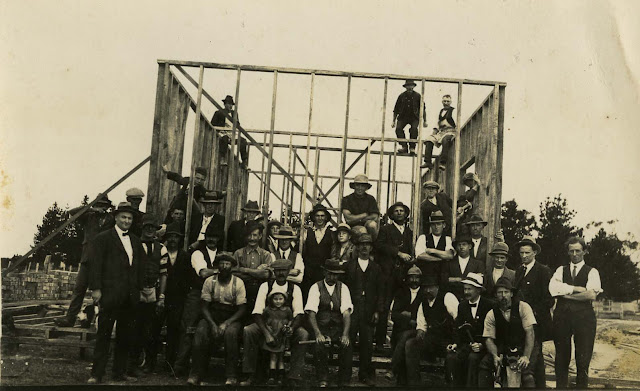 Community
A Cricket Club started in 1893, the Recreation Reserve opened in 1906, and a football team had started by 1907. The Royal Hotel was erected in 1917. The Masonic Lodge commenced in 1923. The Wattle Picture Theatre was opened in 1927, the same year the Koo-Wee-Rup Electric Light and Power Company supplied electricity to the town. In 1929, the first Koo-Wee-Rup Scout Troop was formed. To add further to the amenity of the town in 1930 the water tower and the water supply system opened and in 1943 the Fire Brigade was formed.

Railways
The Koo-Wee-Rup Railway station was opened on August 18, 1889. The Station was originally called Yallock and was re-named Koo-Wee-Rup in 1892. In 1922, Koo-Wee-Rup became a railway junction with the opening of the Strzelecki railway line. This line was closed in stages and the last stretch from Bayles to Koo-Wee-Rup closed in 1959. Passenger services to Koo-Wee-Rup ceased in June 1981 were reinstated December 1984 and ceased again in July 1993.

Oldest buildings in town
The 1884 School building, which had moved from Bethunes Road to Rossiter Road, was shifted again in 1919 to become the Island Road School. The School closed in 1974 and ten years later the building moved back to the Primary School site in Moody Street.
However, the oldest building still on its original site is the house, “The Grange”, off Sybella Avenue. This was built in 1887-88 for Andrew and Agnes Hudson, though sadly Andrew died just before they moved in. Agnes, nee Johnston, was firstly married to Alexander Mickle. Alexander and Agnes were the grandparents of Local Historian, David Mickle.
Posted by Heather at 4:49 PM No comments:

100 years ago this week - Food production

One hundred years ago, this week in March 1913, this appeared in the West Gippsland Gazette, and is a reminder of what a rich area this once was for food production. 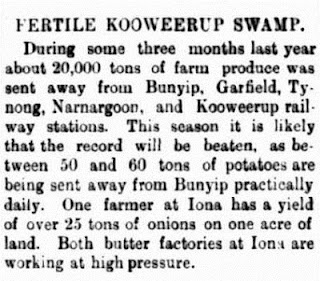 
At Iona, a Creamery run by the Fresh Food and Frozen Storage Company, was opened in 1897 and by 1900 it had 500 suppliers. The Creamery operated until around 1907. In 1906 Drouin Co-Operative Butter Factory established a factory in Iona on the corner of Little Road and the Main Drain. It closed in October 1928 and was demolished in 1930. Another butter factory, operated by Holdenson and Neilson, operated in Iona from 1912 and was taken over by the Drouin Co-Operative Butter Factory in April 1921.If you have been to Iona recently, it is hard to believe that it ever sustained two butter factories.  Cora Lynn also had a cheese factory, click here to find out more about it. 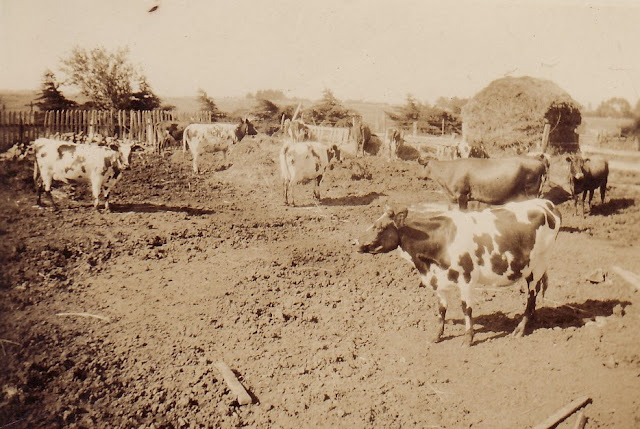 This is a photo of my grandparents (Joe and Eva Rouse) farm at Cora Lynn, taken in 1928. It was typical of the many small farms on the Swamp.
Posted by Heather at 7:30 PM No comments: