Skating was a popular winter past-time 100 years ago - these advertisements for skating at the Bunyip Mechanics' Institute and the Nar Nar Goon Public Hall appeared in the Bunyip Free Press of July 2, 1914. 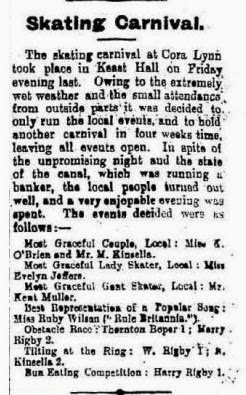 A skating carnival was held at Keast Hall at Cora Lynn on July 17, 1914 - sadly the wet weather and the fact that the Main Drain was 'running  a banker' kept numbers down.
Posted by Heather at 9:15 PM No comments:

At a public meeting held on July 4, 1904 it was decided to purchase some land, on the north side of the railway line and opposite the Railway Station, to build a public hall.  The land, next to the School, was purchased from Mr J.M Gillespie for £10.00 and an energetic working committee was appointed to further the movement, which is undoubtedly another step towards the improvement of the township as a report in the South Bourke and Mornington Journal on July 20, 1904.   The Secretary of the Committee was John Daly, the school teacher. The rest of the committee were J.J. Lyons, C.Pitt, G. Park, W.J. Walker and G.W. Ellis. 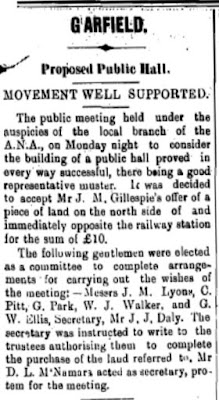 The official opening was Saturday, November 26 1904 with a concert of  a 'high class nature'. A report of the official opening in the Bunyip and Garfield Express said that the hall was commodious and could accommodate between 250 and 300 people. It was constructed of pine walls with hardwood beams and is very tastefully designed. The staging and dressing rooms being up to date, altogether no fault could be found with the structure. The hall was 45 feet by 25 feet, the walls were 14 feet high and the flooring was kauri. The two dressing rooms could be opened to one large room, 25 feet by 10 feet and used for Lodge meetings etc. The hall was designed by J.H. Walker and built by Ingebert Gunnulson.

There had been an earlier function in the hall when the Garfield Branch of the Australian Natives Association (A.N.A) had held a banquet there on November 18.  The A.N.A was a Friendly Society, with the aim of offering financial assistance to its members so thus provided sick pay and funeral benefits. It also aimed to promote the moral, social and intellectual improvement of its members.

The opening ball was held on Wednesday, December 7, which was an unqualified success according to the report in the local paper.  Other early functions included the Garfield Cricket Club’s concert and ball held on December 30, where dancing was kept up till the early hours of the morn,  in the July of 1905 a progressive euchre party and dance was held by the Garfield Progressive Association and in the same month the A.N.A organized a public lecture where Senator Findlay spoke about his recent trip to Japan and China. 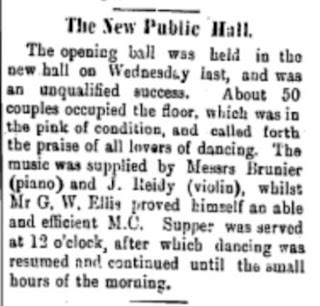 The Garfield Public Library was opened on February 12, 1906. The subscription was 2 shillings and six pence a quarter or 10 shillings per annum. The report said the Committee had secured a splendid stock of books. Was this Library located in the Public Hall?  There is a good chance it was as many Halls also included a Library, especially those built specifically as a Mechanics’ Institute such as Pakenham, Nar Nar Goon and Bunyip - where the building generally housed a public hall and a library with books aimed to improve the education and knowledge of ‘mechanics’ a term used to describe the working man or tradesman. 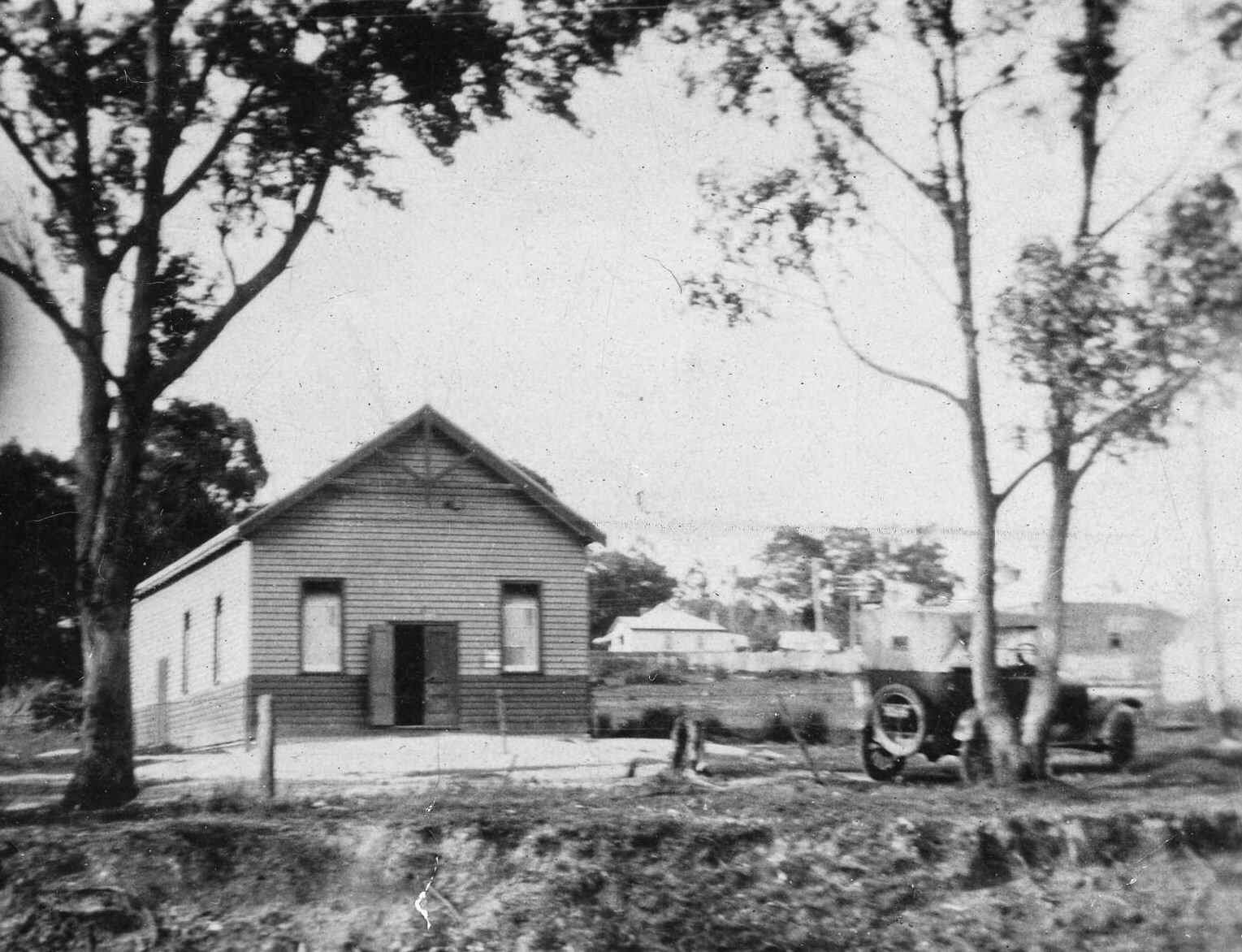 The usual range of events was held in the Garfield Hall - dances, dinners, use as a polling booth, concerts, wedding receptions etc. Then on Thursday, April 15 in 1937 the Hall was destroyed by fire. It had apparently started at 1.30am in the supper room and everything was destroyed except for some military equipment in a semi detached room at the back, according to a report in The Argus. The Hall was insured for £400.00 and its contents for £100.00.  It was rebuilt and was re-opened possibly as early as September 22 the same year. Once again the hall hosted a range of social events - in the early 1950s Dad remembers that square dancing was very popular and that the Hall was packed for those dances - the caller was Bill Colvin of Koo Wee Rup. Over 1953 -1954 improvements were made to the Hall and the kitchen, supper room and ladies toilets were updated. In March of 1954 a Civic Ball was held in the Hall to celebrate the visit of the Queen and Prince Phillip to Australia, they had visited Warragul the day before. Naturally the Queen and Prince Phillip were not in attendance but the local M.L.A, Les Cochrane, and the Berwick Shire President and most of the Councillors were present. The Hall had been decorated with flags and bunting and special lighting effects. The ballerina of the ball was Miss Elvie Cameron.

The Hall was destroyed by fire, once again, in February 1984.
Posted by Heather at 1:49 AM No comments: 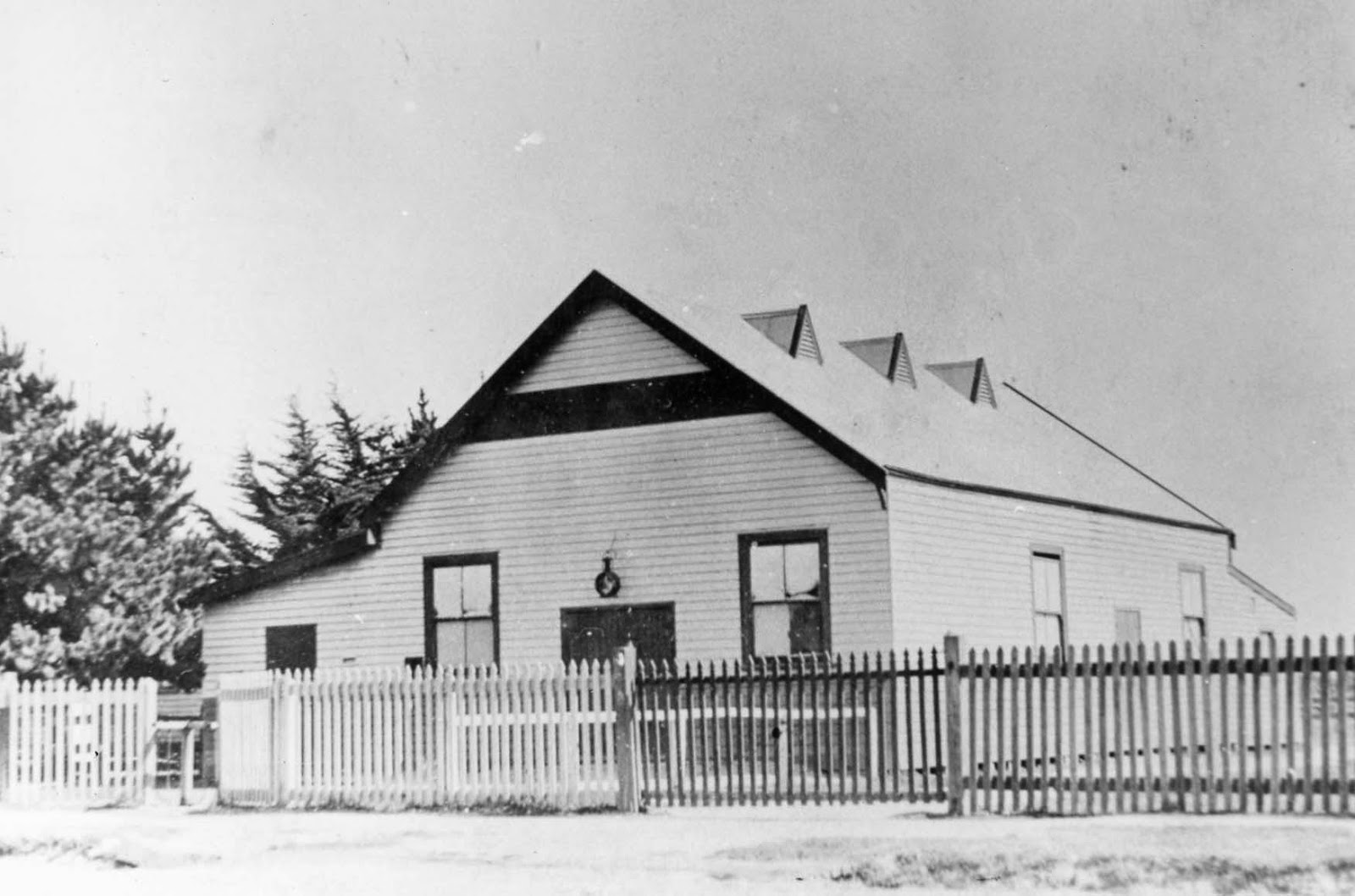 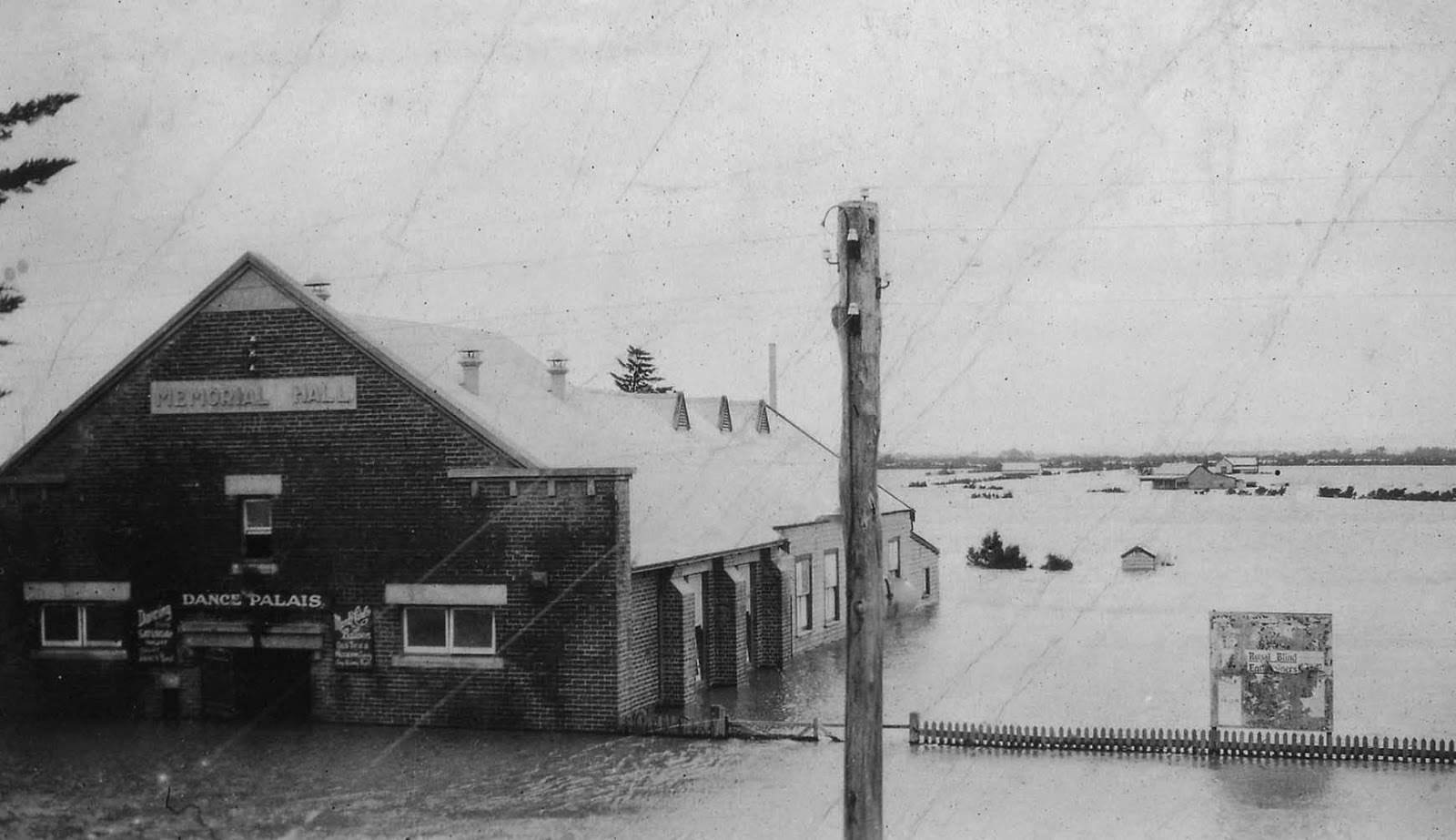 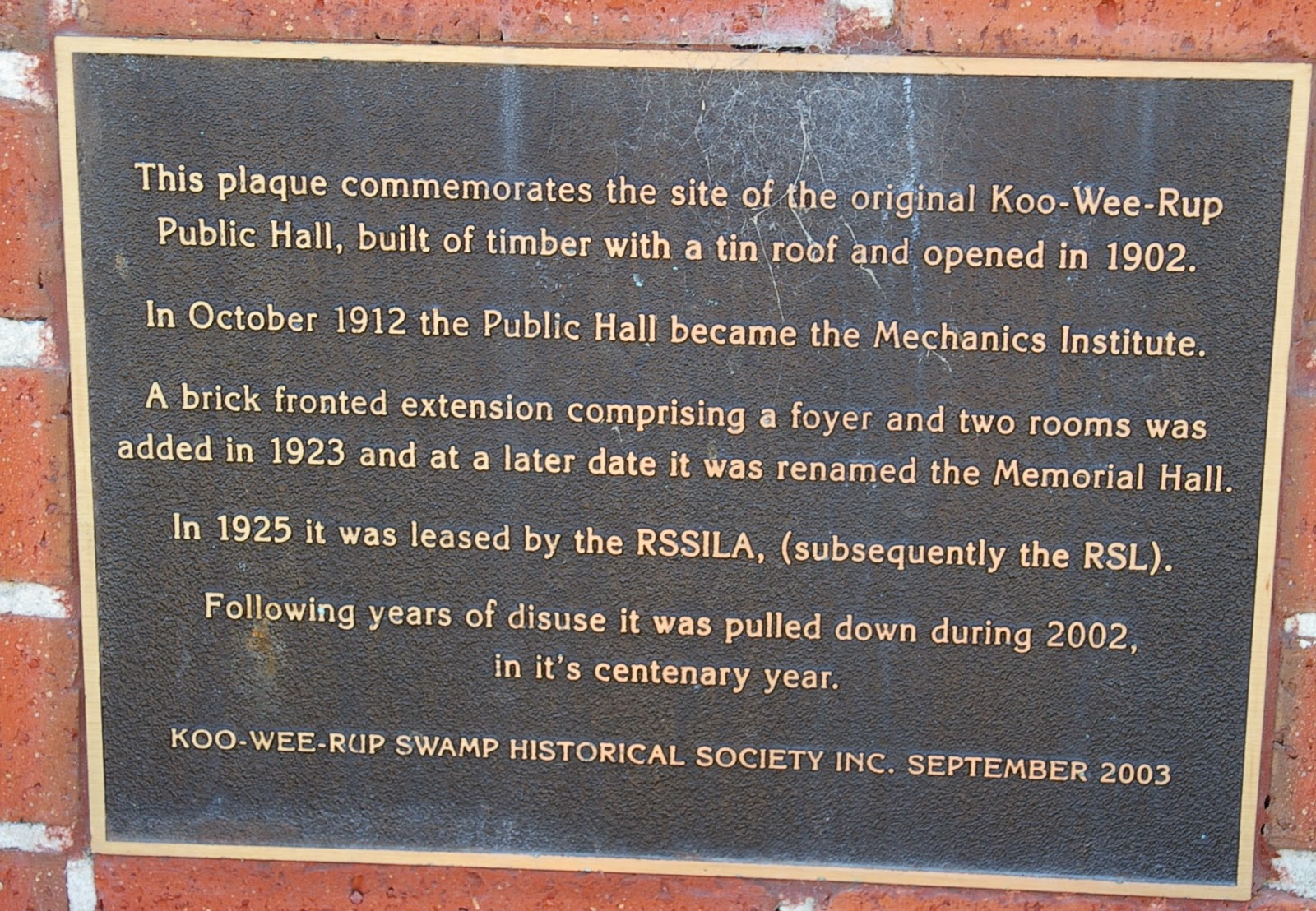 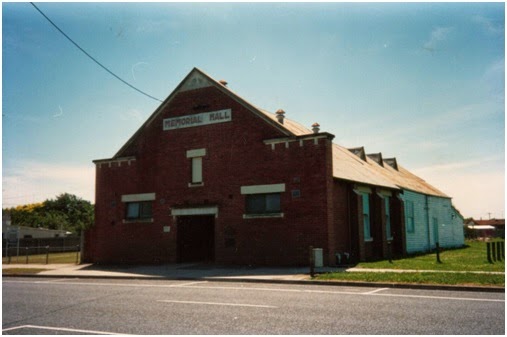 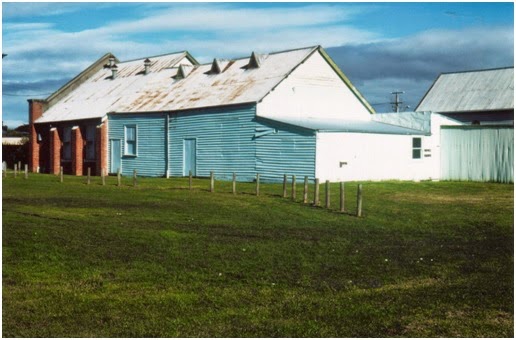 The Koo-Wee-Rup Sun of December 2, 1943 reported on a Public Meeting held at the Memorial Hall on November 26 to establish a local Fire Brigade. Brigades could only be established at the request of the local Council and as such it was Cr Leslie Cochrane who chaired the meeting. Mr A. McPherson, the Chief Officer of the Country Fire Brigades’ Board was also present. He had visited the town previously and considered it a suitable location for a Brigade and the Cranbourne Shire Council had agreed and made the necessary arrangements for the establishment of one.  As both the Council and the Country Fire Brigades’ Board agreed then all that remained was to get the personnel. McPherson suggested that Koo-Wee-Rup establish an A class Brigade which consisted of four Officers and eleven firemen. Under normal circumstance the Board would spend over £1,000 in setting up a Brigade, however due to the War many appliances were unavailable.

McPherson also talked of the social activities enjoyed by members of brigades at the annual demonstrations and that these demonstrations would be resumed after the return of 1,850 men at present in the fighting services. Koo-Wee-Rup established a competition team in 1950. Given that fighting fires can be dangerous, McPherson also said that the Board could grant up to £500 to the dependents of a fireman killed on duty. The Board would also give an annual allowance of £20 to the Brigade and the Council would also give an annual sum.

Volunteers were then called for and thirteen men answered the call and elected their own leaders. The first Captain was the alliteratively named Loyal Leslie Lackman; the Lieutenant was Cyril Isbister; the Foreman was William Mahoney; Secretary Samuel Lewis and other members were Kenneth Cochrane, John Sauer, Edward Holley, Thomas Perkins, William Winters, Albert Rushton, Thomas English and reserves were D. Johnson and L. Plowright. Johnson and Plowright were both under 18 years of age, which is why they were placed on the reserve list, according to the Koo-Wee-Rup Sun report. Lackman’s time as Captain was short lived as a report in the Koo-Wee-Rup Sun of May 4, 1944 said that Captain Lackman was farewelled by the members of the Brigade on April 28 as he had been transferred from the district by his employee, the State Rivers & Water Supply Commission. The report went on to say that in the short time he had been in Koo-Wee-Rup he had exhibited keen sportsmanship and had became a citizen the district could ill afford to lose. Soon after he left Koo-Wee-Rup, Loyal Lackman passed away suddenly on June 2, 1944 at Cobram at the age of 52.

At the meeting held on May 8, 1944 Cyril Isbister was elected as Captain and Clarence Raymond ‘Dick’ Florance elected Lieutenant. In July 1947, Dick Florance started his long reign as Captain, holding the position until October 1972, when John Duff took on the role. Captain Duff held the position until he passed away suddenly on September 13, 1979. Lieutenant Keith Ridgway was then elected as the new Captain. Captain Ridgway served in the role until his retirement in December 1993 and Lieutenant Lindsay Black was elected. Captain Black finished his tenure in May 2002 when Michael Duff was elected.

A temporary fire station was to be established until the permanent building could be erected which opened in Rossiter Road in September 1947. The present Station Street building (which was expanded in 1984) was officially opened October 2, 1959. 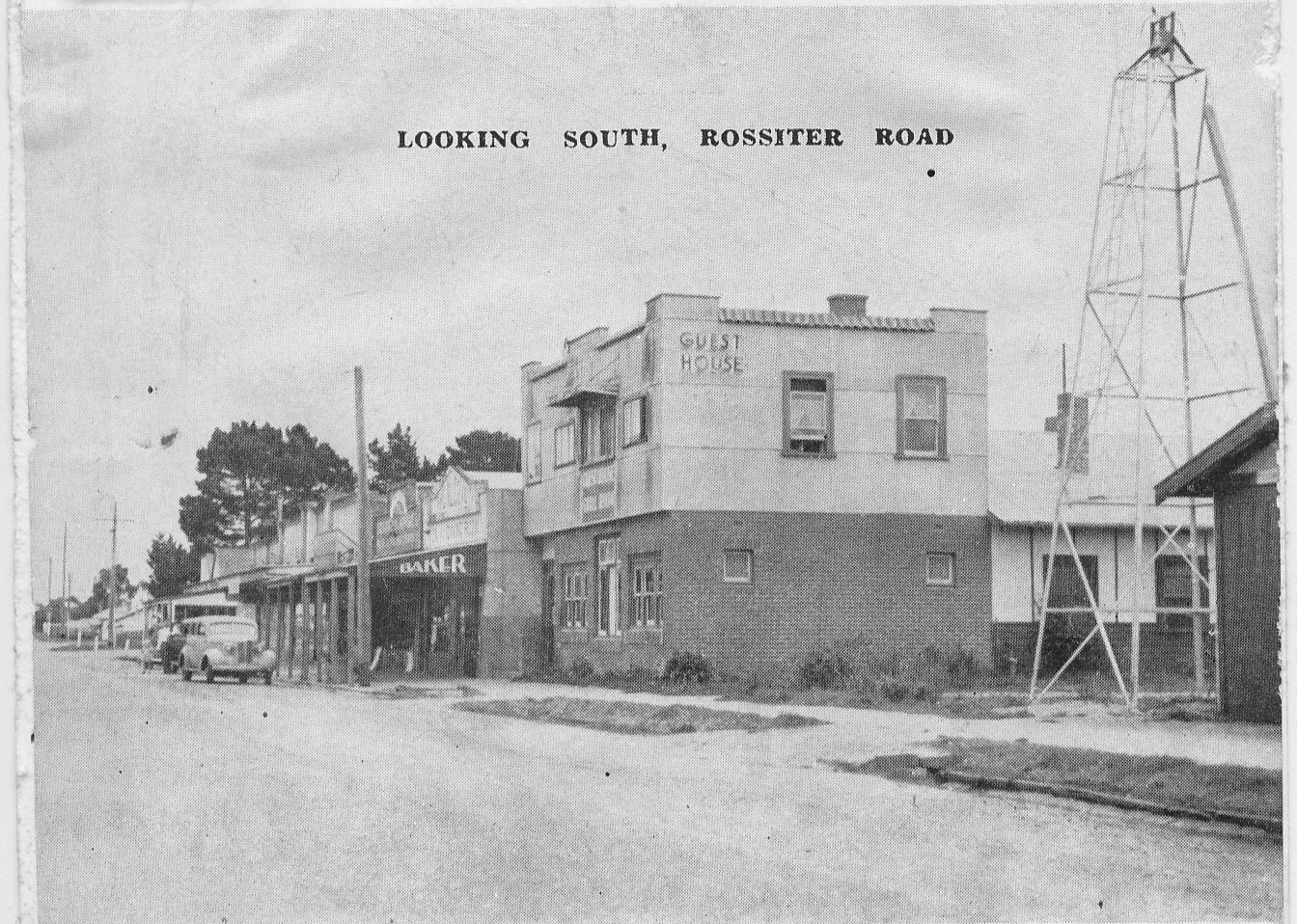 This photo partially shows the Rossiter Road fire station as well as the bell tower.

The Ladies Auxiliary was formed on November 14, 1956 with Mrs Claire Howarth elected as President.  The other Office bearers were Mrs Connie Grundy, Mrs Tobe Florance and Miss Janice Duff. The Auxiliary still supports the Brigade with fund raising and other activities.