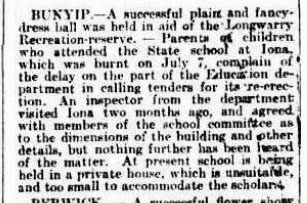 The Iona State School was located on the corner of Thirteen Mile Road and Bunyip River Road at Vervale. It commenced in 1894 and was originally known as Koo-Wee-Rup North; in 1899 it changed its name to Bunyip South and then in 1905 to Iona. When the school opened on July 9, 1894 it had 83 pupils and the Head Teacher was Arthur Jamieson. By 1895, it had grown to 120 pupils and the new Head Teacher Joseph Lyons arrived in the April of that year. He had three assistants – Mr Colquhoun, Miss Alston and Mrs Lyons. Joseph Lyons remained at the school until 1903. The Teachers Residence was built in 1908; previous to this the Head Teacher had to live in Garfield.  The original building burnt down on July 6, 1913.  The new building opened on April 28, 1914 with 164 pupils. In 1942, electricity was supplied to the school and the telephone was connected in 1964.

100 years ago this week - Wife wanted

This was in a couple of newspapers, 100 years ago this week in October 1913, the Adelaide Mail, Bendigo Advertiser and the Horsham Times.  I am not sure if the story is true, or if the love lorn cheesemaker found himself a tall, fair lump of  a Protestant, but either way, it's  a great story! 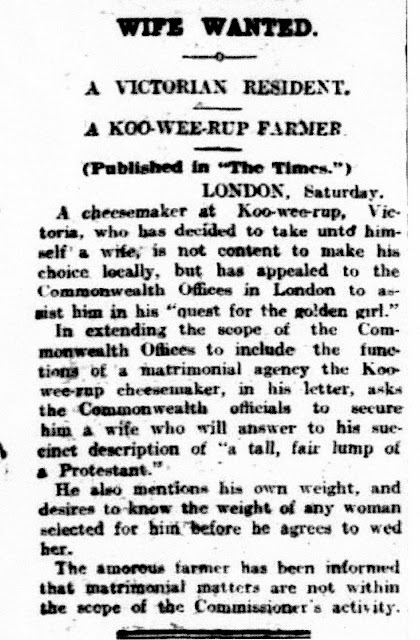