100 years ago this week - Potatoes

100 years ago this week, The Australasian, in the Country Gleanings column reported on the good potato season on the Swamp. 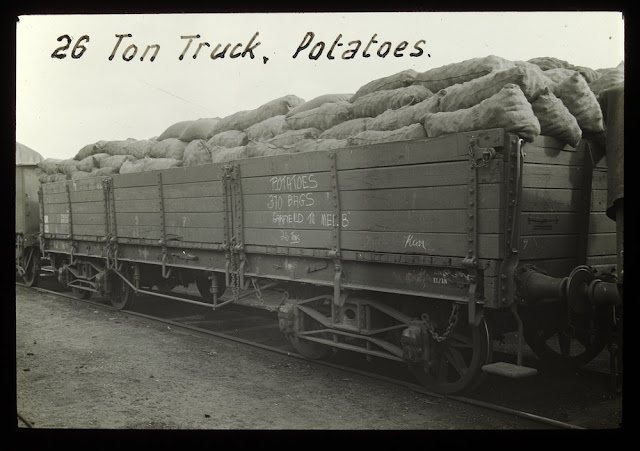 Email ThisBlogThis!Share to TwitterShare to FacebookShare to Pinterest
Labels: 100 years ago this week, 1915, Farming, Potatoes, Railways

The beginnings of the Royal Hotel, Koo-Wee-Rup

The January 8, 1915 issue of the Powlett Express reported on the hearing at the Wonthaggi Licensing Court  held on December 17, 1914. There were applications for ‘certificates authorising the issue of victualler’s licences’ at various towns, including Koo-Wee-Rup.

There were six applications for Koo-Wee-Rup; three of the sites were in Station Street and three in Rossiter Road. All the applicants agreed that only one licence was required. The first applicant was Mr E.J Hayes. A Mr E. Brayshay appeared for Hayes and he said that accommodation was required in the town as there were 200 residents in the town and 500 people within a 4½ mile radius. Hayes proposed a 30 room establishment in Rossiter Road to be built at the cost of £3,750. Hayes had 14 years experience in the business and had hotels at Drouin, Watchem and Nhill.

The next applicant was Mr D. McNamara. McNamara was represented by Mr J.S Meagher. Meagher said that McNamara was a pioneer of the district who had supplied the navvies and settlers with provisions, sometimes wading through icy water to do so. He had conducted a hotel in Carlton and his site was in Station Street, on a corner, opposite the Railway Goods shed. In support of McNamara’s application, Mr C.J. Moody said that Hayes’ site was no good as it was under water four years ago, but McNamara’s site was high and dry. McNamara’s proposed hotel was to cost £4,000. McNamara then spoke and said that he was in Koo-Wee-Rup in 1893, store keeping for six years. 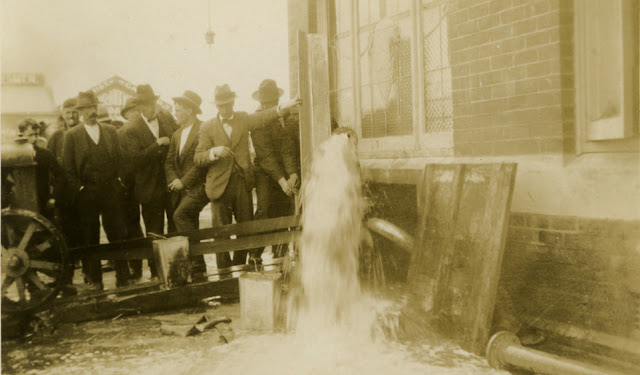 Pumping the water out of the hotel cellar with  a Fordson tractor, 1934.  In spite of the evidence presented at the Licensing Court, the Royal Hotel site was obviously not immune to flooding.
Koo-Wee-Rup Swamp Historical Society photograph

The next applicant was Mr A.E Edney, whose site was in Station Street, near Rossiter Road. Mr A.W Stevens, in support of Edney’s application, said that 75% of traffic in the town came along Rossiter Road, however the Presiding Magistrate, Mr Cohen, said that the court had evidence that 75% of traffic came the other way! Edney was a retired storekeeper from Leongatha and he proposed to erect a house of 34 rooms at a cost between £2,000 and £3,000.

The fourth applicant was Mr Lyman Wildes. His site was in Rossiter Road, south east of the railway line. His building was of 24 rooms and would cost £3,700. Mr Cohen (Presiding Magistrate)  pointed out that Wildes’ application had no provision for a bathroom for females. Wildes was the licensee of the Lang Lang Hotel, which he would get rid of if his application for Koo-Wee-Rup was successful. He said that his site was higher than McNamaras. Constable Cole of Lang Lang supported Wildes’ application and said both he and his hotel were of good character.

The fifth applicant was William Clews, who had a site in Rossiter Road. Clews was represented by Mr P. Conant. Conant said that McNamara’s site was hidden by the Goods shed and that it would take a ‘Philadelphia lawyer to find it on a dark night when it was raining’. Clews had operated hotels for 16 years in Sale, Ballarat, Traralgon and Moe. Clews planned to spend £3,500 on his hotel.

The last applicant was Sarah Alice Kraft, her site was next to Mr Edney’s in Station Street. Mr Dunn appeared for Kraft.  He said that Koo-Wee-Rup was not a holiday resort and people went there on business and business was transacted in Station Street. He said that it wasn’t just the building that was to be considered it was also comfort and convenience and making people feel at home.  Kraft had conducted the Bunyip Hotel for 14 years and she had many testimonials.  Her proposed building would cost £2,700.

Who was the winner? It was Denis McNamara. I can’t find any reports as to why he was selected over the other applicants, however he wasted no time. Tenders were invited for the construction of the Hotel in February. Mr A. G Oliver won the tender for the contract price of £3,305. The finished building was a ‘fine commodious building of nearly 30 rooms’, according to the Lang Lang Guardian, and ‘one of the finest edifices of the kind in Gippsland’. The rooms were fitted out by Mr McKee of the Royal Arcade ‘in a most up-to-date and luxurious manner’.  It was officially opened on Thursday, September 9, 1915 and thus Koo-Wee-Rup’s Royal Hotel is 100 years old this year!
Posted by Heather at 7:49 PM No comments: