This interesting, but sort of weird, story was published in the Weekly Times of January 12, 1895. It is called False Friends and True and was written by E. Marcus Collick.  I came across it when I was looking for evidence of Lyrebirds on the Koo Wee Rup Swamp (see here)  The fictional story is about a group of birds and animals who have come together to elect their King and they meet on the Koo Wee Rup Swamp (hence my interest). The last King, the Koala, says they have even begun to drain our dear old Koo-wee-rup, the place where our kings have been elected from time immemorial. It's a bit violent  at the end as they go into battle against their enemy, the fishes. Sadly, the Lyrebird, which I am rather fond of, is portrayed as duplicitous and a 'false friend'.   You can see the story on Trove, here.

I tell you the Kangaroo is the rightful king of Australia, argued the Opossum.

Prove it, answered the Lyre-bird.

With the greatest of pleasure, returned the Opossum,  first of all, the Kangaroo is the largest and strongest of Australian animals, to say nothing of being the best mannered. Why! just look at the graceful hop.

And think how fond men are of Kangaroo tail soup, murmured the timid little Wallaby.

Well! all I can say is that I would rather be a biped, than a half and half sort of creature, said the Lyre-bird,  It would simply be a disgrace to Australia to have for a king a creature who might be called anything between a biped and a quadruped.

That's just it, piped the Opossum,  that is his great recommendation, for, besides being the best natured fellow on earth, he is perfectly original. Now tell me, please, what other country can boast of an animal at all like the Kangaroo?

Well! perhaps not, said the Lyre-bird, but originality is not always a charm. I for one don't see that the Kangaroo is anything to be compared to the Emu. Such a retiring, aristocratic bird, advocating women's rights, too.

New-fangled bosh, growled the Opossum. Women's rights, indeed. The Kangaroo has too much sense to uphold such nonsense.

What is all this? said a deep voice. The trio looked up quickly. and were surprised to see the very gentleman whom they had been discussing.

Oh, Mr Kangaroo, gushed the Lyre-bird, blushingly,  your friend Mr Opossum has just been saying that the Emu has the best right to the sovereignty of Australia. I for one do not agree with him.

Is that so? answered the Kangaroo, casting a look that meant mischief at the modest little Opossum. The talk about friendship, he continued, it seems to me that it is only a guise for the intrigues of interested and politic persons. Allow me, Mrs Lyre-bird, to assist you to a good place, the election is about to begin.

This conversation took place at the Koo-wee-rup Swamp, in the south of Victoria, where the birds and beasts had gathered together to elect a king. The two candidates were the Emu and the Kangaroo, and, as the latter was a very sociable fellow, it was thought that the question of succession would be easily settled.

The performance was about to begin. A general rush towards the place of election began; and here were soon assembled all our Australian birds and beasts - old enemies looking askance at each other out of the corners of their eyes, for by the rules of the place they were forced to be neutral.

An old and hoary-headed native bear was assisted to the chair, followed by a general burst of applause, for this was their last king, forced through old age to resign his position.

My friends, began this individual with emotion, this hearty token of affection is very pleasing to me. I have been your king for many, many years, long before the white men entered our country, spoiling all our hills and valleys with the abominations they call towns. Why, pointing with his paw,  they have even begun to drain our dear old Koo-wee-rup, the place where our kings have been elected from time immemorial (groans.) Ah, he proceeded, well do I remember the time when the only human beings were blacks, and I used to have sweet young piccaninny soup everyday. But things were all spoilt by the whites, because they frightened all the blacks away, and the white piccaninny did not make nice soup - too tough.

Well, my friends, to return to business, I wish you to choose between these two candidates - the Kangaroo and the Emu. Both of these gentlemen are highly respected by me; so put it to the vote!

Then began that commotion which usually attends on such an important performance, each creature endeavoring to drop his vote into the box first. During the fuss the Lyre-bird found time to steal to the side of the Emu, and say It is well seen whom His Majesty the Bear would prefer to succeed him; of course, he only mentions the Kangaroo out of politeness. I think your claim is indisputable.

You traitoress, sneered the Black Snake, who was stealthily creeping past,  I heard what you said to the Kangaroo; so you can just look out for your eggs this year.

When the votes were counted, it was found that the Kangaroo had a large majority; and, after the Emu had solemnly sighed, and exclaimed, Just my luck! the successful candidate made a speech which ended with - And now, dear friends, as you have seen fit to elect me king, I think that we should first subdue that impudent family which has lately separated from us - the fishes.

The successful upholders of the Kangaroo now began to flock round him to offer him their congratulations; among them came the Lyrebird, who said Oh, Mr Kangaroo, of course, we all knew that you would be successful. I am delighted to see you made a parent of this happy multitude.

Thank you, Mrs. Lyre-Bird, answered  the Kangaroo. I am deeply indebted to you for the way in which you have canvassed for me. (He had been informed of this by herself.)

Humph barked the Dingo, a parent of this happy multitude, indeed, it's not apparent to me how he could that!

I am so very glad at your success, murmured the opossum, timidly.

I think I can do without your congratulations, answered the Kangaroo, with more sincerity than politeness.

Oh, please believe that I am sincere, said the poor little Opossum, but the Kangaroo had turned and was talking to the Porcupine.

Some days afterwards the campaign began against the fishes, who had mustered in the Murray for the purpose of election also. Many indecisive battles were fought, but at last the Kangaroo concocted a simple plan which promised success. This was to have a net drawn around a shallow corner of the river, drive a few stragglers into this and attack them, and when the main army, which was in the neighbourhood, rushed down to rescue the net was to be drawn up suddenly above the level of the water. Thus the whole army would be imprisoned, to be slaughtered at leisure.

The post of honor and of danger - that of  drawing up the net at the right moment - had been allotted by the Kangaroo to the Lyre-bird as a reward for services rendered. So Mrs Lyre-bird took up her position on a log jetting out into the stream, and all went well until, when the fishes made their downward rush, and danger seemed imminent, she showed her true colors, grew frightened, dropped the cord into the river and flew away.

The Opossum, happening to glance that way, saw the danger, and without a thought of the way he had been treated, plunged into the stream, seized the cord, and regaining the log, succeeded, by an immense effort, in drawing up the net at the right moment.

The campaign was over; and, tired with his efforts, the Opossum was dolefully trudging homeward, when he heard steps behind him. On turning, he was surprised to see the kangaroo hastening towards him, in a series of graceful hops.

My friend, said the Kangaroo, with emotion, will you ever forgive me?

Oh! there is nothing to forgive, returned the happy Opossum.

You thought I did not notice you, continued the Kangaroo, but I did. Your unselfishness gained our victory, and I know now who was the false friend, and who the true. We must be friends for ever.

The Opossum unhesitatingly agreed, and they shook paws on it.
Posted by Heather at 7:38 PM No comments:

Lyre birds and Koalas on the Koo Wee Rup Swamp

This interesting article about fauna on the Koo Wee Rup Swamp in 1894 - 1895 - when there were still koalas and lyre birds. It comes from a column in The Argus of September 12, 1934 called Nature Notes and Queries by Alec H. Chisholm. You can see it on Trove, here.

Koalas at Koo-wee-rup
Stating that he has been very interested in the discussion on koalas' food trees, E.A.B. (St. Kilda) recalls that in the years 1894-95 he was camped at the Koo-wee-rup swamp and saw many koalas in swamp gums there. The trees were on a narrow ridge parallel with and about 20 chains east of the main drain, and the ridge was entirely surrounded by real swamp and tea-tree. A young koala taken to camp would climb tea-trees and black-woods, but would not feed there, although he throve on leaves from the swamp gums. That young bear was kept for about three months, and was never seen to drink. The writer wonders, therefore, if the moisture in leaves is sufficient for them.

It is added that the swamp gum ridge was cleared for cultivation and the koalas disappeared. In the clearing of the eastern end of Koo-wee-rup many lyrebirds must have been destroyed. 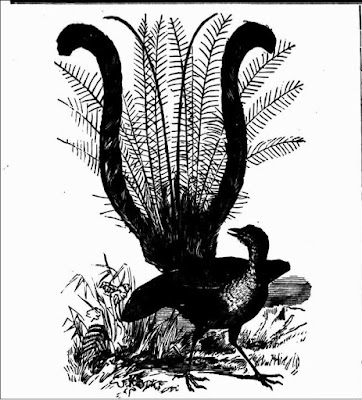 An illustration of a lyrebird from 1872.
Illustrated Sydney News and New South Wales Agriculturalist and Grazier  June 8, 1872.
http://nla.gov.au/nla.news-article63618692

The same column also talks about Lyrebirds on the Moe Swamp in the 1870s.

Lyrebirds Near the Moe Swamp
An interesting bit of history is given by C.P. (Melbourne) in reply to a reader's recent inquiry whether lyrebirds were ever known about the north bank of the Moe swamp. C.P. says that he travelled by the first train that left Prince's Bridge for Gippsland-that was in the 1870's and camped that Easter on the Moe River. It was understood among the settlers then that the "Australian pheasant," as the lyrebird was called, was frequently seen or heard in the vicinity of the swamp.

"People," it is added, "were moving freely about Moe that year as Weinberg, the mailboat carpenter who stole 5,000 sovereigns, was at large somewhere in the district. The police visited our camp at midnight on Good Friday and asked us, should anyone come to us for food, to be sure and let the stationmaster know. At that time there was only one tumble-down building in the Moe of to-day."

Martin Weinberg is alleged to have stolen 5,000 sovereigns in 1877 and was at large - read about him here or here or here.
Posted by Heather at 1:37 AM 1 comment: