How to spell Koo Wee Rup 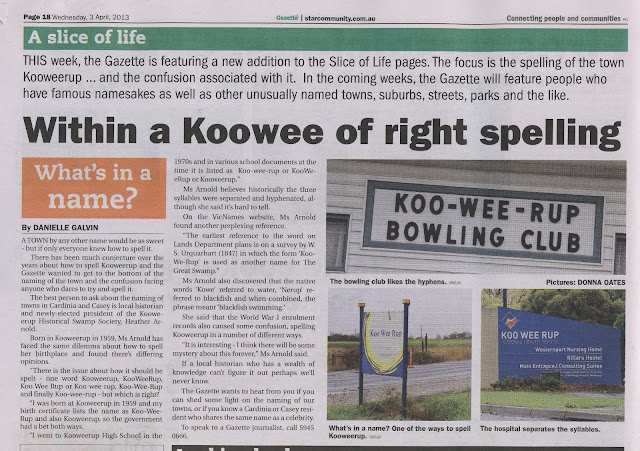 Posted by Heather at 4:22 PM No comments:

Who was the first white child born on the Koo-Wee-Rup Swamp?

According to Mickle Memoirs of Koo-Wee-Rup written by Dave Mickle, the first white or European baby born in the town of Koo-Wee-Rup was John Leslie O’Riordan who was born in August 1892. John’s parents, John and Elizabeth, had opened the first store in the town in 1890. I checked the Victorian Births Deaths and Marriages Indexes (BDMs) and they list Horace Napier Mackenzie as being born in Koo-Wee-Rup in 1891, the year before John, so should Horace get the credit for being the first European baby born in Koo-Wee-Rup?  Horace’s parents were George and Grace Mackenzie. Grace was the teacher at the Yallock, later known as Koo-Wee-Rup State School, from 1888 until 1911.  The other baby listed as being born in 1892 was Andrew Clark, the son of John and Barbara Clark. I imagine these births were registered at Cranbourne as they had a Registrar of Births and Deaths, Alexander Duff, who was appointed in 1855. Koo-Wee-Rup’s first Registrar was Alexander Leithhead, who was appointed in June 1894.

Then I wondered if we could determine was the first white baby born on the Swamp, in general, not the town of Koo-Wee-Rup. There were many men working on the creation of the Main Drain between 1889 and 1893, at one time over 500 were employed - many of whom had their families with them and after the adoption of Carlo Catani’s Village settlement scheme more families arrived and lived on their allocated twenty acre block – by September 1894 there was said to be 230 families on the Swamp or 1280 persons.

Once again I checked the BDMs to see what Swamp babies I could find - Yallock, the Village settlement outside of Bayles, had eight babies listed between 1892 and 1895. One of the problems in determining birth places is that it seems that many babies in the BDMs have the place of registration listed as the place of birth. The first Registrar at the eastern end of the Swamp was not appointed until January 1, 1895 when James Pincott was appointed for Bunyip South (as Iona was previously known). In 1894 no babies were listed as being born in Bunyip South but in 1895, 49 were registered, 69 the next year and 49 in 1897. As a comparison, in 1895 only 36 babies were registered at Dandenong so that’s a lot of babies and I suspect that due to travel difficulties many parents had put off registering their children until a Registrar was appointed locally.

Even to get to Nar Nar Goon, which had a Registrar since 1887, would have been a long journey. Nar Nar Goon had 64 babies registered between 1889 to 1895. Garfield did not get a Registrar until September 1899 when John Daly was appointed and eight births were registered in 1900, these are the first births listed at Garfield in the BDMs, though it seems unlikely there had been no births in the town in the previous twenty or so years.  Previous to this it appears that Garfield babies were registered elsewhere – for instance Ingebert and Mary Gunnulson (he was a Garfield builder) registered babies at Nar Nar Goon in 1889,1890, 1892 and 1894, in 1896 at Bunyip South and in 1900 at Garfield.  George and Mary Brownbill registered babies at Bunyip South in 1896 and 1898 and Garfield in 1901.  So this shows the difficulty in determining how many babies were born on the Swamp and who was the first.

Most of these early births would not have had a Doctor present. There was one at Cranbourne, at least from 1866, though a report said that he was a clever man, but one who had the habit that many otherwise good man has fallen victim to. The Minister [Alexander Duff, the Presbyterian Minister] kept his books and instruments and for special cases he sobered up for a couple of days, the hotel being tabooed to him till he had completed the case in hand. It may well have be less risky not to have a doctor attend. A doctor visited Koo-Wee-Rup weekly from Cranbourne from around 1900 and the first resident Doctor in the town came in the 1920s. A Bush Nursing Hospital with a skilled nurse opened in Koo-Wee-Rup in July 1918. Many women, especially in rural areas, would have had a local midwife, usually very experienced but with no formal qualifications attend to her when she gave birth at home. The availability of nurses and doctors would partly account for the improvement in the infant mortality rate. In the 1890s, this rate varied from ten to thirteen percent, that is for every 1,000 babies born, 100 to 130 babies would die under the age of one. In the 1920s this rate had dropped to around six percent.

There was an interesting case reported in The Argus in May 1893 – the headline on the May 8 story was Supposed child murder at Koo-Wee-Rup. The body of baby boy was found buried in a box. The police interviewed Mrs Johnson, an experienced nurse, who had helped deliver the baby of a Mrs Parker on February 4, 1893.When Mrs Johnson had arrived Mrs Parker was lying in a miserable bed with only a piece of blue blanket for covering and alongside the bed was the dead body of a well grown fully developed male child. When Mrs Johnson returned the next day the baby had gone and she was told that the father on the baby, Michael O’Shea, had buried the baby. Subsequently Ellen Parker and Michael O’Shea were charged with causing the death of the child and arrested. You can read the full article on Trove, here. 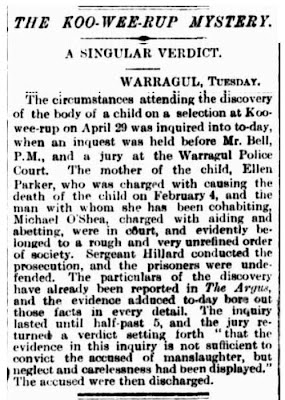 The account of the inquest, in The Argus of May 17 1893 (reproduced from Trove, left) said that both Ellen and Michael belonged to a rough and very unrefined order of society. The jury decided that there was insufficient evidence to convict the accused and they were found to be not guilty. A very sad state of affairs for all concerned and it especially brings to focus the hard life the early settlers lived on the Swamp, with primitive, wet conditions, no decent housing, no schooling for the children, poor wages and no medical help.

Posted by Heather at 3:26 AM No comments: