Small family Dairy farms used to be the predominant farm on the Koo-Wee-Rup Swamp until the 1970s or so. In the 1920s, for instance, it was estimated that there were close to 12,000 dairy cattle in the Parishes of Koo-Wee-Rup, Koo-Wee-Rup East and Yallock (approximately Koo-Wee-Rup to Bunyip and south to Bayles, Caldermeade and Catani) at the same time the human population would have been maybe 4,500.

My father, Frank Rouse, grew up on a small dairy farm on Murray Road at Cora Lynn and this is his story.  Family farms relied on the (generally unpaid) labour of family members and Dad, his brother Jim and their two older sisters were expected to take part in the daily chores on the farm.

The family milked cows and separated the cream which they sold to the Drouin factory to make butter; the rest was fed to the pigs, which when they were fat enough were sold at the Dandenong Market.  This wasn’t especially profitable and around 1949 when Jim was 18 and Dad was 16, Jim got the family a milk contract.  This meant they no longer had to separate the milk; it was sold as whole milk for the Melbourne market for a much higher price and thus the family income increased by 250 per cent.  Jim had arranged the contract through Campbell Buchanan, of Cora Lynn, who was also the carrier. 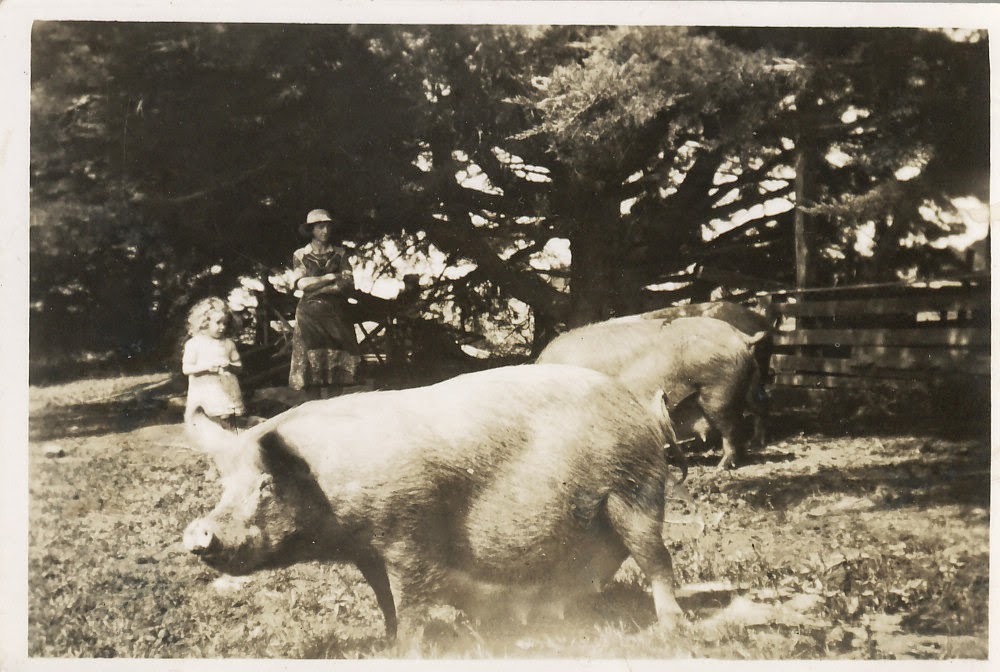 When they got the milk contract the family began the change from Jersey cows, which produced less milk but more cream to Friesians, they were bigger cows, had less trouble calving and produced more milk.

However, this meant that they had to build a new cow shed. The original cow shed had been built by Frank and Jim’s grandfather when he took up the block in 1903. It had six single bails, 25-30 cows were milked daily by hand, before school and after school.  Neighbours, including Joe Storey and Johnny King had milking machines. Maybe not everyone did but Dad feels fairly sure that they were the last dairy to become mechanised. 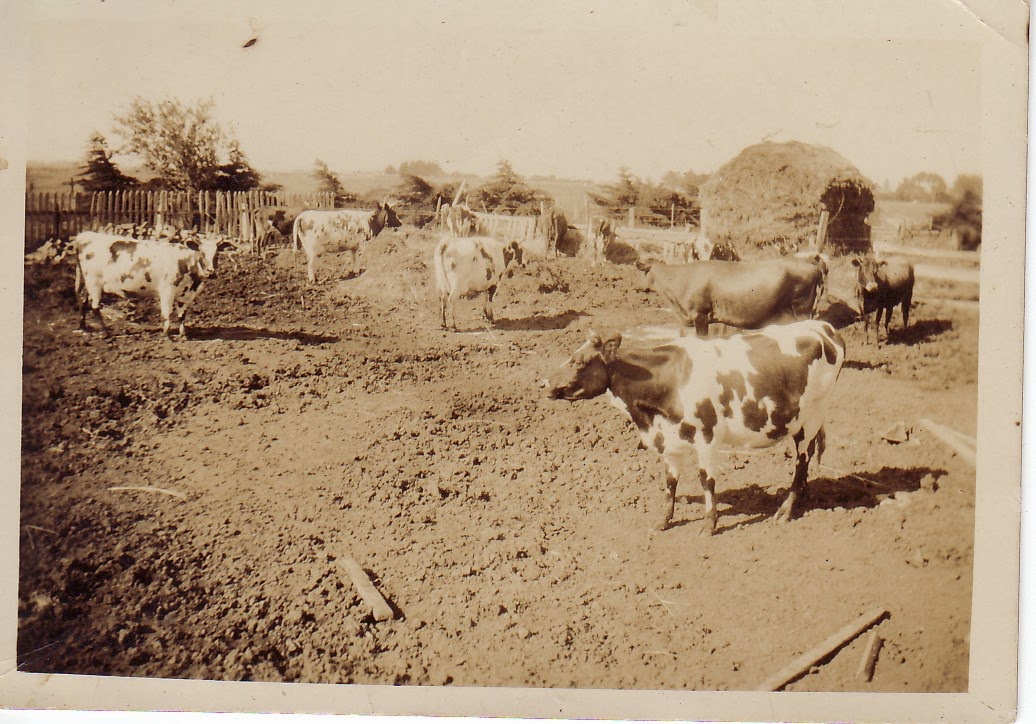 Rouse family farm - Dad remembers it as 'acres of mud'

The new cow shed was built by Frank and Jim and, because of the conditions of the milk contract, the shed needed concrete floors and walls. For the concrete they needed sand, so they had to take the horses and dray up to the end of Dessent Road to the Main Drain. There was no levee bank then so they walked the horses, attached to a scoop, down into the drain where they pulled the scoop along, filled it up with sand and pulled it up the bank where Dad and Jim shovelled it onto a flat section then later shovelled it all into the dray, which belonged to their neighbour the aforementioned Johnny King, take it home and shovel it out.

They had purchased a second hand 2hp Rosebery petrol engine which powered the concrete mixer, thus the floor and lower wall (five feet high) were built (using formwork, not bricks) and the rest of the walls were timber, with a corrugated iron roof. The dairy, connected by a 6 ft wide breezeway also needed to be concreted.   Once the shed was built, Joe (Jim and Frank’s dad) purchased a second hand Mitchell milking machine plant from a farm in Koo-Wee-Rup. It took 90 minutes to get to Koo-Wee-Rup with a wagon and three horses – then Frank and Jim had to take the plant apart, load them and then they had to put them back together and install the machines. The plant was powered by the Rosebery engine.  After this, the family milked 45-50 cows. The Rouse family had four horses, which Dad describes as ‘3 reasonable and one mongrel’ – the best two were called Ned and Rats.

Dad had been used to working with horses as when he was 15 he worked a team of horses for Sandy Priest who lived near Bayles. He used to plant crops, scuffle spuds etc. Sandy was also a top cattle breeder and often topped the sales at Newmarket. Dad was actually paid for this work which was a bonus as they never got paid at home.  Sandy Priest, who lived somewhere on the Bayles - Longwarry Road had 100s of acres, his land backed up to the Railway Line, but he lived in a small shed.  His bed was two spud bags stretched over poles, there was a stove in the shed and a windmill outside which filled a trough for water.  When Dad was about 16 he grew some spuds on Sandy’s land and which he rented and then paid the rent in labour. 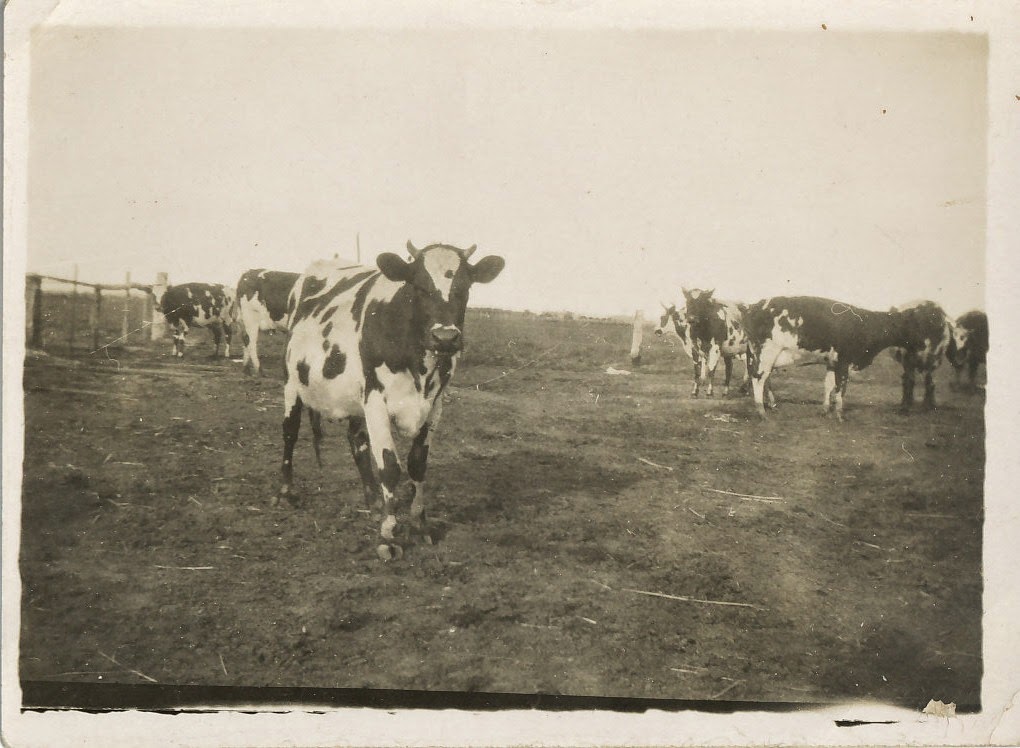 Around the time of the construction of the cow shed, Jim and Frank also began growing potatoes together, at home. Initially, all the work was done by horses but it wasn’t long before they purchased a brand new grey Fergie tractor - it was petrol, 16 hp and even though they were only aged 19 and 17, the Company financed them.  Four years later, in 1955, they purchased 60 acres from Johnny King, in Sinclair (now Bennetts) Road at Cora Lynn. It was, we believe, about £6,000 but he allowed them to pay it back a certain amount per year – he had always been a good support to them. Jim and Frank milked cows for a year or two after that, then other family members took over and the Rouse dairy farming came to an end on June 22, 1960 when all the cattle and plant were sold at a clearing sale. 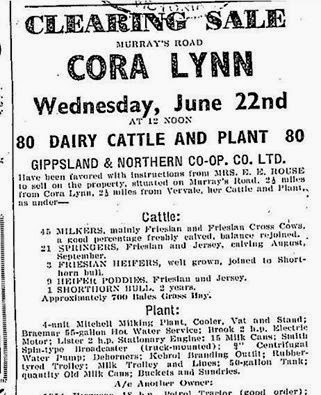 Posted by Heather at 3:21 AM No comments:

This report of one of the best balls ever held in Cora Lynn comes from the Bunyip Free Press of March 11, 1915. 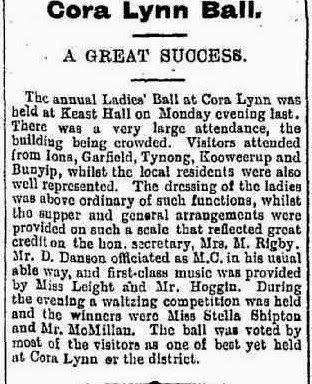 Posted by Heather at 4:46 PM No comments: