The earliest cemetery was the Cranbourne Cemetery - the site for the Cemetery was reserved on December 11, 1857 and the following Trustees were appointed at the same time - Alexander Cameron, Patrick Thomson, James Smith Adams, William Sykes and Edward Malloy.  William and Annabella Lyall are both buried at Cranbourne - they were the owners of Harewood house on the South Gippsland Highway which they built starting in 1857. A report of the content of his will (it was once quite common for newspapers to report this type of information) says that William Lyall ‘directs that his body be buried in the allotment set apart on his property as a private burying ground and that as little expense as possible be gone to in connection with his funeral’.  It doesn’t appear that his wishes were adhered to in the matter of the burial as he has a substantial grave at Cranbourne. William died in 1888 and Annabella in 1916.  Also buried at Cranbourne is Charles Rossiter, the source of the name Rossiter Road.  He lived at Hawksdale at Koo-Wee-Rup from around 1873 and was instrumental in having the first school in the area built on the corner of Bethunes Road and Bayles Road in 1884. 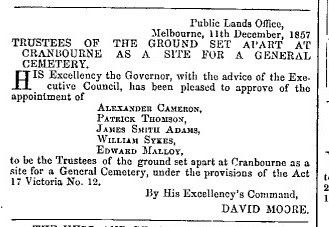 The site for the Pakenham Cemetery was reserved on February 13, 1865 and the first trustees were appointed on May 8, 1865 and they were John Startup, Richard Fortune, Michael Bourke, Thomas Mulcahy and George Ritchie.  It is believed that the first burials actually took place in the 1850s.  The owner of the Royal Hotel at Koo-Wee-Rup, Denis McNamara, was buried at Pakenham after his death on July 27, 1925. Mr McNamara had started a business in Koo-Wee-Rup in 1891, then left the area and returned in 1904 when he purchased O’Riordans store and in 1915 built the Royal Hotel. His funeral was described as one of ‘the largest in the district, representative of every class and creed’.  Charles Wadsley who died in 1944 at his home in Koo-Wee-Rup is also buried at Pakenham. Mr Wadsley was a Past Master of the Koo-Wee-Rup Masonic Lodge and ‘an expert on asparagus growing’ according to his obituary. 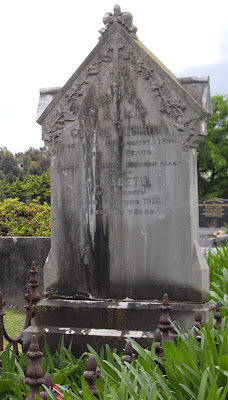 The Bunyip Cemetery site was officially reserved on November 22, 1886 and on December 6, 1886 the first Trustees were appointed - William Harry Webb, Lawrence Finch, James Mortimer, Christian Hansen, Peter Gillespie and John Reynolds. This cemetery was used by folk living on the eastern end of the Koo-Wee-Rup Swamp such as Cora Lynn and Iona. The first official burials did not take place until eight years after the Cemetery was officially gazetted with the first one in March 1894. Of the first 20 burials in the register, 19 were children. This was a result of the high infant mortality rate at the time before vaccinations and antibiotics came into widespread use. Here is a sample of this depressing and sad list: William Barnes aged 6 - cause of death Diptheria; Ethel Wayneith, 9 months - Marasmus (severe undernourishment); John Peart, 2 months - Marasmus; David Fallon 9 weeks - Maramus; Ann Benham 10 months -Pneumonia; Lily Norton 10 weeks - Whooping cough; William Heuson 4 months - Whooping cough; Denis McIvor 20 days - Meningitis; Mary Anne Mulligan 3 years - Diptheria.

Lang Lang Cemetery site was reserved on December 5, 1887 and the first Trustees appointed December 10, 1889 were Thomas Poole, William Jones, Prosper Henry Victor Le Roux, Joseph Foster, William Norquay, Patrick McGrath, Edmund McGrath and Alexander McMillan. As a matter of interest the grandly named Prosper Henry Victor Le Roux is actually buried at Cranbourne. Christopher Moody – the source of Moody Street is buried at Lang Lang.  He was a Cranbourne Shire Councillor.  In 1890, Mr Moody owned the site of the Koo-Wee-Rup township and sub-divided the land between Rossiter Road and the Main Drain and Denham’s Road and the Highway. Very little of the land was sold due to the 1890s depression. The sub-division set out Moody, Gardner (called Koo-Wee-Rup Street by Moody), Henry (called Christopher Street by Moody) and Salmon Streets. 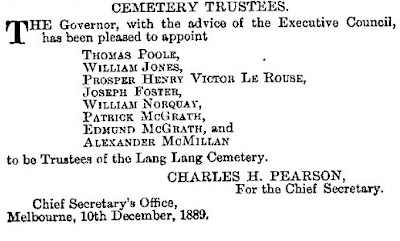 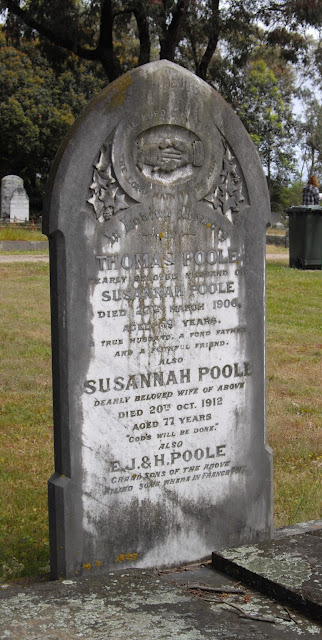 Posted by Heather at 1:19 AM No comments:

I came across some old Bunyip & Garfield Express newspapers from the early 1970s and so thought we could take a look at what was happening in the area in 1971 - 45 years ago.

The Longwarry Dance which was held every Saturday was a huge social event. In July, Gaynor Gibson, won the ‘Girl of the night’ in front of 810 people. Gaynor was an 18 year old typist and the daughter of Hilton and Greta Gibson of Vervale. Admission to the dance was 60 cents and there was a bus from Pakenham, with a pick-up at Nar Nar Goon, Tynong, Garfield and Bunyip as well as buses from Warragul, Drouin and Thorpdale which picked up from Trafalgar and Yarragon.  In the November, Doug Parkinson performed at the dance to over 1,000 people.  The bands playing on the night that Gaynor won her title were ‘popular local bands’ Solid State, Purple Haze and Noggins and Batts. It appears that each ‘Girl of the night’ then had to face the judges again in the quarter finals and ultimately the ‘Girl of the Year’ was awarded in December, in 1971 to Marilyn Cross, a 19 year old clerk from Catani.  Marilyn won $50.00 in cash as well as a coloured photograph from Holley Studios in Warragul and ‘a garment’ from Lazanne Fashions also in Warragul.

There were weekly advertisements from Tuttons’ Self Service store at Garfield (Phone Garfield 72) and back then you could buy a large tin of Milo for 48 cents and a large tin of peaches for 32 cents. Each week there was also a big advertisement from Robinson’s SSW Foodmarket, Main Street Pakenham (Phone  Pakenham 5) as well as Permewans at Bunyip (they had two phones - Bunyip 2 or 8)

In July, the Garfield Newsagency was sold by Mr & Mrs McArthur to E.H & P.C  Vardon.  The Newsagency sold Education supplies, books and magazines, cigarettes and tobacco, toys, travel goods, sporting goods, electrical appliances, cycles and accessories.  Also advertising was Gilmore’s Garfield Sport and Cycle Store which sold a huge range of sporting goods and gifts as well as being a Tobacconist and a Hairdresser. 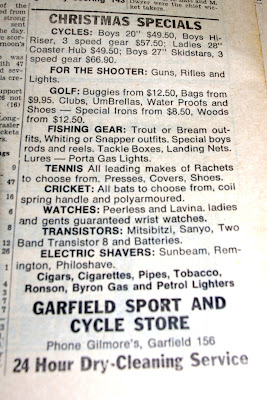 In July, the Garfield Progress Association advocated for a Technical School to be built in the town as they said that everyday 100 students catch the train to either Drouin or Warragul to further their education and there were 700 children travelling to secondary schools at this end of the Shire.   A Technical school was never established in Garfield but there was a report in February 1972 about Warragul Technical School going co-ed – there were 610 boys and 10 girls (all the girls specialised in art) The paper reported that the girls had settled into the school ‘in true women’s liberation fashion’ and ‘the order of the day is smart uniforms which contrasts pleasantly to the boys dress’

The same issue as the Fashion Parade report had the headline ‘Dedication lacking says Garfield Official.’ Mr Laurie Marsh, Vice President of the West Gippsland Football League said ‘that there was something lacking in the footballer and officials of today.... The task of administration was becoming harder because it was difficult to get the dedication which marked the old players.  It was difficult to get this in these days of fast cars when so many young fellows had so much money in their pockets. It was different from the old days when players were prepared to change in an old fashioned furniture van or the scrub.’ Mr Marsh also said that this lack of dedication was not confined to the players; some umpires were ‘not very fit and not very talented’

Work commenced on the new Garfield Telephone Exchange in November. This was an automatic exchange which would allow subscribers in Garfield, Iona and Tynong to dial direct to Melbourne without going through the Exchange.

Finally, the Shire of Berwick granted permission to the Garfield Christmas Eve Carnival Committee to block off Main Street, from 8.00pm to 11.00pm, between the Thirteen Mile and the bakery for the Carnival to be held on December 24. There would be the ‘usual attractions’ including hay rides, jinker rides and the arrival of Father Christmas, who would distribute free ice creams and chips.
Posted by Heather at 12:39 AM No comments: