The establishment of the Court of Petty Sessions at Bunyip was ‘gazetted’ in the State Government Gazette in an announcement dated February 14, 1905. The first court session took place in Kraft’s Hall which was a privately owned hall operated by William Kraft, of the Gippsland Hotel.  The current Bunyip Hall is on the site of Kraft’s Hall.

The announcement in the State Government Gazette regarding the establishment of the Bunyip Court
http://gazette.slv.vic.gov.au/

The first sitting of the Bunyip Court was held on March 15, 1905. The bench consisted of Mr Cresswell, the Presiding Magistrate, and two Justices of the Peace, Ramage and A'Beckett. The first case concerned Myrtle Morris who was charged with having no visible means of support. Myrtle was remanded to Prahran for a further hearing.  The second case involved a twelve year old, John Mannix, who was charged with endangering property by setting fire to some scrub, which destroyed gates and fences.  He was released into the care of his father who entered a recognizance for the boy's future good behaviour.  This article shows how the legal system has changed (for better or worse depending on your view point) as a 12 year old would never have his name mentioned in relation to a legal trial today.

In another case heard on March 16, 1910 before Presiding Magistrate Harris and JPs A’Beckett and Pearson, George Nicklen of Iona was charged with inflicting grievous bodily harm on his 15 year old niece, Elizabeth Bidwell. The report in the South Bourke and Morning Journal said that he was in the habit of beating the girl unmercifully and the case had been brought under the notice of the Society for the Prevention of Cruelty to Children. In her evidence, Lizzie Bidwell said her uncle had chained her to a bed for days at a time and he had threatened to hang her with a rope. In the end the poor girl ran away to neighbours who took her to the doctor.  Nicklen denied giving the girl more than she needed and was fined £10.00, plus costs or three months in gaol. Ironically, on the same day the Court fined a man £8.00 for stealing four heifers or three months in gaol, if he didn’t pay. I don’t know what happened to poor Lizzie Bidwell but it’s sad to think that the Court valued her suffering at about the same rate as the theft of four cows.

The Bunyip Free Press of January 15, 1914 reported that the court was crowded  when four cases of sly grog selling  were launched against an aged Assyrian with the very Anglicised name of  John Ellis. Ellis was represented by Mr M. Davine and had brought his own interpreter as he didn’t speak English. A Revenue Detective, Joseph Blake, had been working undercover in the area and he had visited Ellis on a number of occasions as Ellis had a little shop, with general stock; Ellis also did hair cutting.  Blake alleged that Ellis sold him alcohol, Ellis denied this.  Patrick McGrath, who leased the house to Ellis and had known him for nine years, called Ellis one of the best and straightest men on the Swamp. Mr Davine presented evidence that Joseph Blake was a professional liar and an informer.  In the end, the case was dismissed with the payment of costs; the Presiding Magistrate said we will give Ellis the benefit of the doubt if he will pay costs.  The costs were just over £17.00 but were reduced to £15.00 after some haggling; a report a few months later said the costs had been paid.  There was a similar outcome a few months later when Frederick Carpenter was charged with conducting a gambling house in Garfield. The charges were withdrawn on the condition that he paid the Crown’s cost of £15.00.

There are reports of cases in the Court up to the 1950s and they cover the whole range of legal matters from a committal trial for murder,  theft, assault, traffic matters, debts and failure to send a child to school - in 1914 there was a spate of these and the recalcitrant parents were fined five shillings or 48 hours in the lock up.  I presume that the Court met at the Bunyip Hall, so I would be interested to know if that was the case. According to the State Government Gazette the Bunyip Court closed on May 1, 1981. The announcement stated that the  books and other records of the said Court and of the Clerk thereof be delivered to the Clerk of the Warragul Magistrate’s Court. My parents have no memory of the Court at all, in spite of the fact that Dad has been at Cora Lynn for all his 85 years and Mum has been there since she was married 63 years ago, so perhaps it wasn’t used very often after the Second World War. The last case I could find in the papers was from May 1953 when the Dandenong Journal reported that Berwick and Cranbourne Shire rate payers will be pleased at the success Health Inspector K. N. McLennan is having in his war against roadside rubbish dumpers. Mr McLennan successfully prosecuted at the Bunyip Court,  J. Lyon, grocer, of Boronia, fined £3, with £3/6/6 costs, for depositing rubbish on the Princes Highway near Tynong. He also had four cases at the Pakenham Court. (Dandenong Journal, May 6, 1953)

The announcement in the  State Government Gazette, regarding the closure of the Bunyip Court  http://gazette.slv.vic.gov.au/
Posted by Heather at 6:45 PM No comments:

The Bush Nursing Hospital Movement began in 1910 with the establishment of the Victorian Bush Nursing Association (VBNA). At the time the current medical system consisted of big hospitals such as the Royal Melbourne which were run along charitable lines and whose role was to treat poor people, who could not afford to pay a Doctors fee.  There were also private hospitals which only the wealthy could afford. To help offset medical costs Friendly Societies or Lodges were established which people could join for a yearly fee. This gave them access to the Friendly Society doctor and access to medicine dispensed from the Friendly Society Dispensary. There was also a growing move to nurse people in their own homes through what is now the Royal District Nursing Service.  People in the city and the suburbs could have a nurse visit them to help recover from confinements and general illness. This type of service took pressure off the public Hospitals. Lady Dudley, the wife of the Governor General, was aware of these visiting nurses and had also seen first hand the need for skilled nurses in the bush, so from these experiences came the idea of Bush Nursing Hospitals. Lady Dudley promoted and raised money for the idea and thus the Victorian Bush Nursing Association began in 1910.

To obtain a Bush Nursing Hospital, the local community had to raise the money to fund the cost of the nurse’s salary, board, uniform and a ‘means of locomotion’. The salary was set by the Bush Nursing Association at the rate of around £80.00 per annum, the rate of pay for a hospital nurse with five or six years experience. The first Victorian nurse was appointed to Beech Forest in March 1911. Eventually some towns provided cottages for the nurses to provide accommodation for both the nurse and the patient. Koo-Wee-Rup was an early example of this where the original nurse, Nurse Homewood, started work in the bush nursing centre in July 1918; this was later replaced by a Soldiers’ Memorial Hospital. Pakenham’s Bush Nursing Hospital opened in 1926.

According to the book History of Shelley Memorial Hospital by the late Denise Nest, the push to get a hospital in Garfield started about 1930, when Dr Kenneth McLeod proposed the idea. The community raised around £340, but due to the Depression the momentum for Hospital slowed. On December 4, 1940 a meeting was held and the Garfield branch of the VBNA was formed with an Executive and 26 Committee members, so there was obviously a lot of enthusiasm for the idea.  The Committee purchased No. 8 and No. 9 Railway Avenue and a hospital plan was approved. The building could accommodate five beds and would cost about £1500. However the hospital was put on hold due to the War.

A new Committee was elected in December 1944 and it was decided that the hospital would be a Branch of the Warragul Hospital instead of a Bush Nursing Hospital. So in 1945 the Garfield and District Hospital Committee was formed and all the assets of the Garfield branch of the Victorian Bush Nursing Association were transferred to this new committee. From 1946 to 1948 land in Jefferson Road was acquired; some was purchased and some was obtained by swapping the Railway Avenue land with some of the Jefferson Road blocks. All in all blocks 16 to 24 were acquired and plans were drawn up in August 1946 for a 15 bed hospital. This lapsed due to the shortage of material and labour after the War. The Committee went through various changes in personnel, other plans were drawn up but Government finance was not available. By 1948, the Hospital Committee had raised over £2,600. Various submissions were made in the 1950s to the Hospital Commission to get the Garfield Hospital established but to no avail.

However, in January 1944, Mr Emile Shelley, the chemist at Bunyip, passed away and he generously left money for projects for the ‘beautification and advancement of Bunyip’. One idea was a Hospital. In the end, the money that had been raised by the community for the Garfield Hospital, plus the £1,330 realised from the sale of the Jefferson Street land was put together with some of the Shelley Trust money and the Shelley Memorial Hospital Society was established in 1960. The Shelley Memorial Hospital at Bunyip was officially opened on March 19, 1966 and closed on May 1, 1991. The building is now part of Hillview Hostel.

Posted by Heather at 6:08 PM No comments:

The Bush Nursing Centre at Koo-Wee-Rup was established in July 1918. Nurse Homewood was in charge. The Bush Nursing movement had begun in 1910 with the aim of supplying skilled nurses to country areas. Local committees had to pay the nurse’s salary and the Central Council of the Victorian Bush Nursing Association then supplied a nurse.

On May 24, 1923 the Fallen Soldiers Memorial Hospital was opened in Station Street. It was opened by the Shire President, Cr E.Simpson Hill. During the ceremony, Mrs Margaret Hamilton officially opened a ward in honor of the late Kitty Trounson (sometimes referred to as Townson). Kitty was an original member of the Bush Nursing committee. Mrs D.McNamara donated a furnished cot in the honor of her son, Jack. Mrs Appleford also donated a cot. The Hospital could accommodate medical, surgical and midwifery patients. 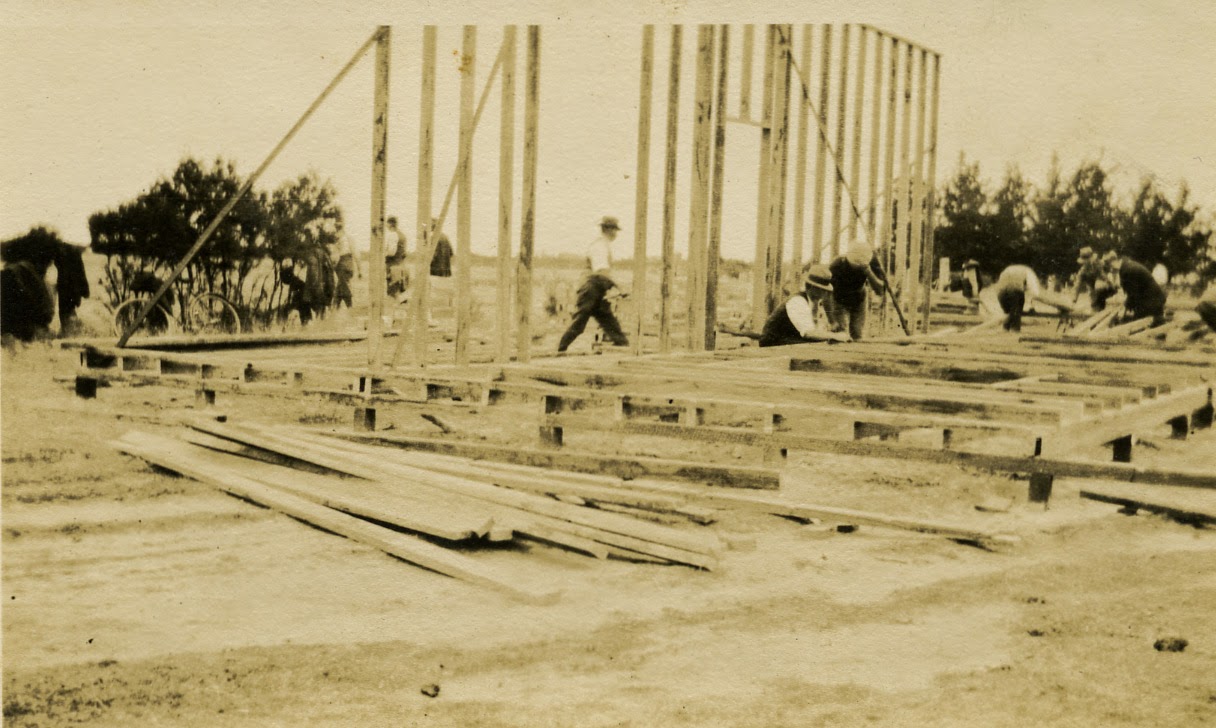 The first Resident Doctor was Dr Andrews. Matron Tuffin was in charge with Sister Morley. In 1927 Chemist, Felix Tattam, arrived in Koo-Wee-Rup and set up in Rossiter Road. He later married Sister Tuffin. He sold the business in 1934 to Mr Brewis.

Dr Hewitt and Dr Appleford gave medical attention to the victims of the railway accident at Koo-Wee-Rup. The accident occurred on December 24, 1928. Fifty two people were injured. 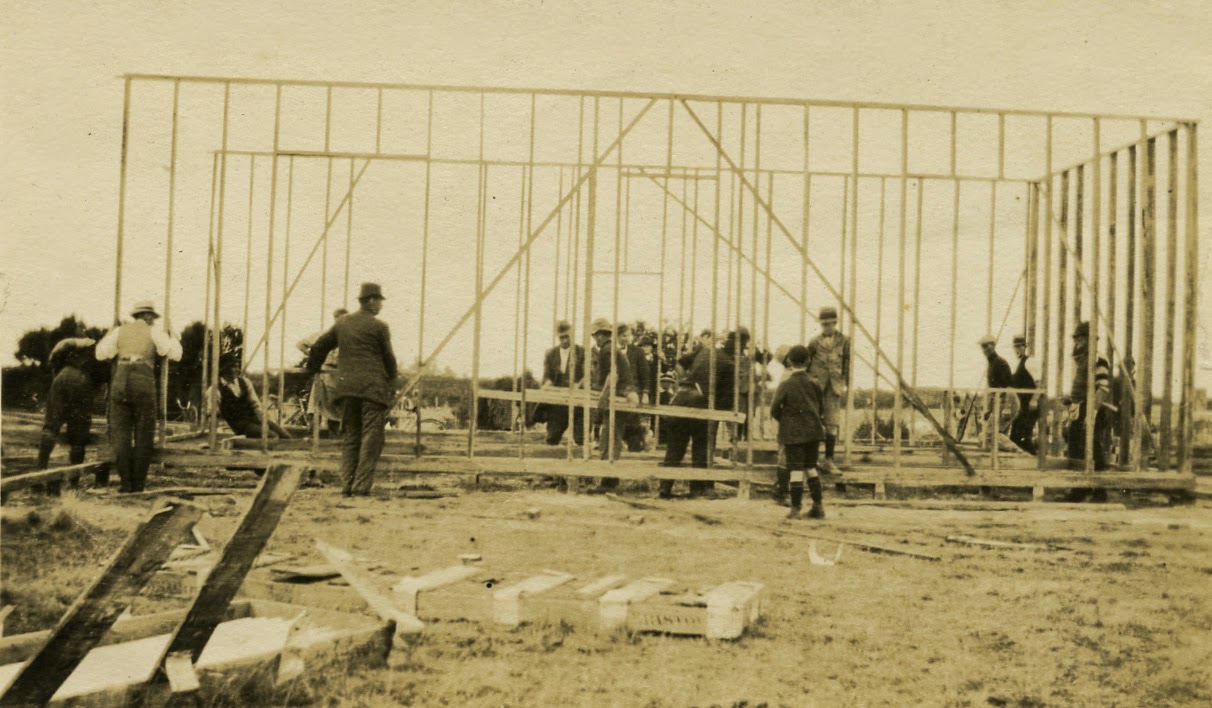 In the first week of September 1930 there were five babies born at the Hospital. Daughters to Mr and Mrs Tom Burton, Mr and Mrs Frank Egan, Mr and Mrs S. Games, and sons to Dr and Mrs Hewitt and Mr and Mrs Blythman.

In 1935 the new operating theatre was opened. Lady Mitchell performed the opening ceremony and Sir James Barrett, President of the Bush Nursing Society, congratulated the hospital on its progress. In 1938, for the first time, rates of pay and conditions of work were set for nurses in Victoria. Nurses were to work a fifty hour week. 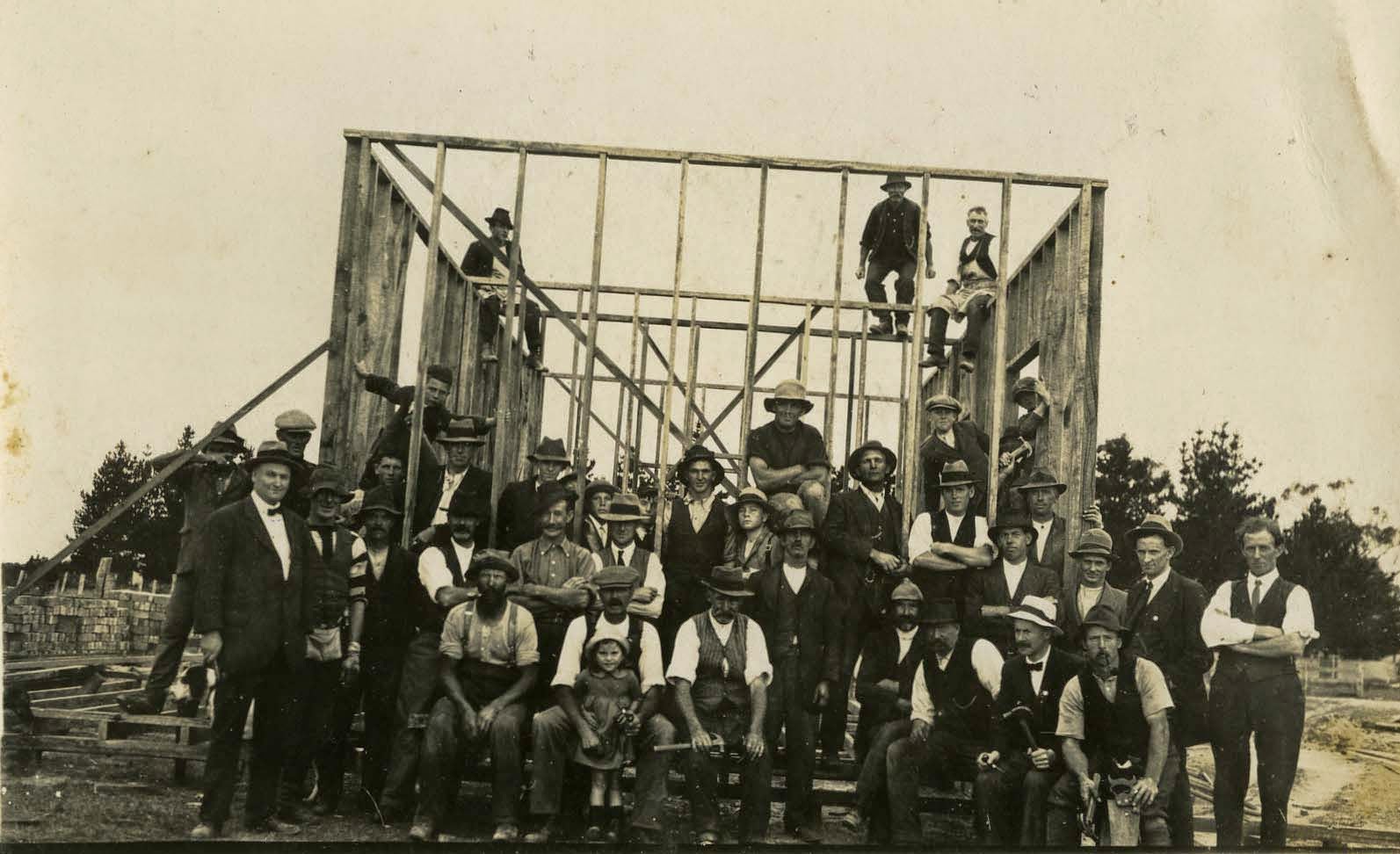 1955 the Westernport Memorial Hospital was opened. On July 28, 1955 a public meeting was held to establish a Ladies Auxilliary. 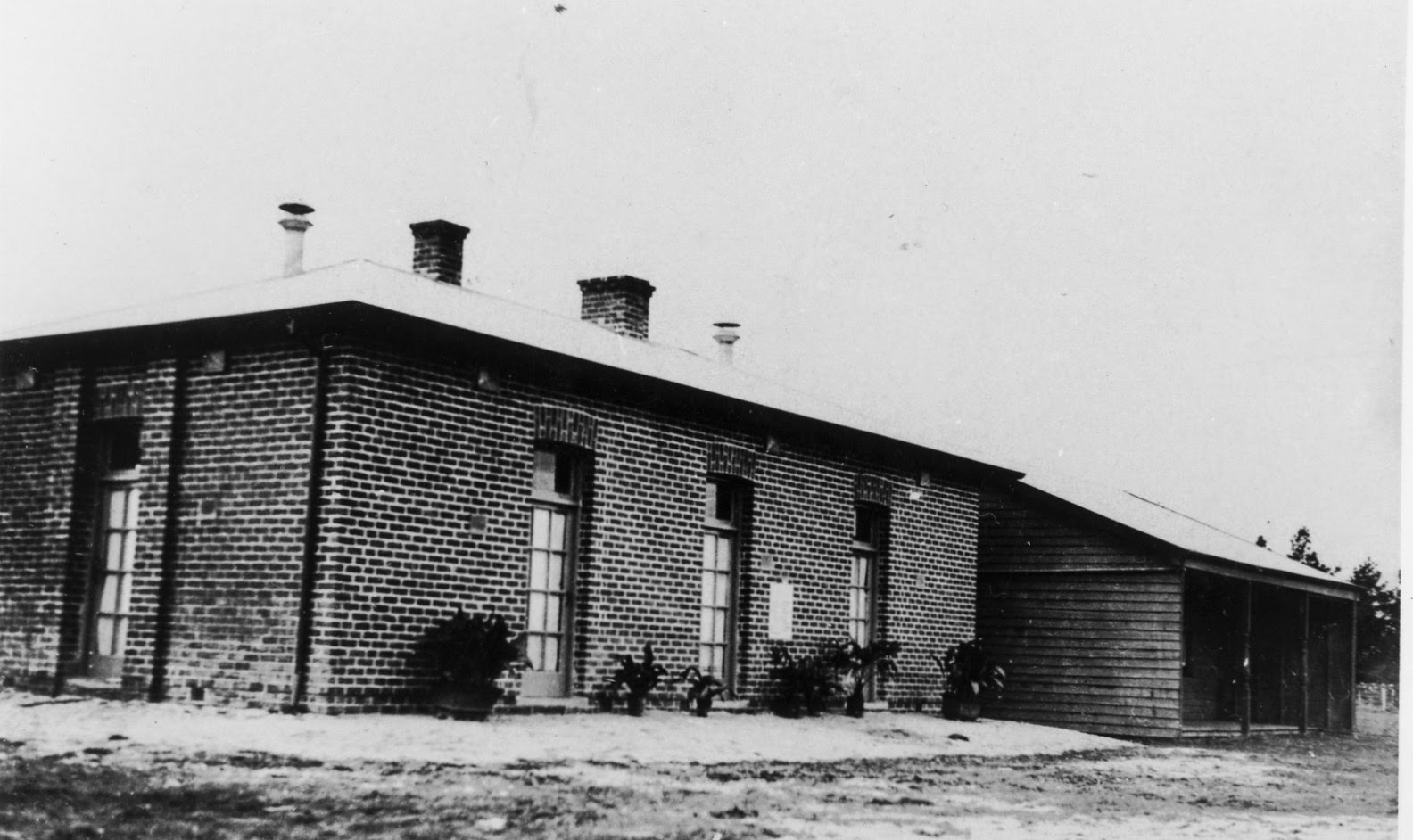