The Rouse family have had the newspaper delivered to Cora Lynn and Vervale since the end of World War Two. Dad remembers that Mrs Simcocks, from the Garfield Newsagency, used to deliver papers and the mail in her Chev (or it may have been a Dodge, it was a big American car). In the late 1950s, Mrs Simcocks got a VW Beetle and used that for deliveries.  We also got the mail delivered by Mrs Simcocks - apparently she took it from the Garfield Post Office to the General Stores at Vervale and Cora Lynn, where it was sorted and then delivered it with the papers. 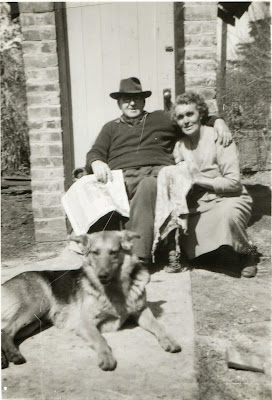 If you lived less than two miles from the Post Office / General Store at Cora Lynn or Vervale, you didn’t get a mail delivery you had to pick it up from the Post Office.  Mrs Simcocks would also bring out small parcels such as items from the Chemist or even meat from the butchers if you rang early enough. The Rouse family on Murray Road always had the Sun News Pictorial delivered and this continued when Dad and Mum got married in 1956 and moved onto the farm on Main Drain Road. Sadly, our newspaper deliveries stopped at the end of June, 2017.

This is Grandma and Grandpa (Joe and Eva Rouse) and Delacy* the dog, taken around 1950. Joe's reading the paper, delivered that day from Garfield. I think Grandma has her apron in her hand. It's taken in front of the toilet, obviously a sunny spot!.

After Mum and Dad were married in 1956, they also had the bread delivered from the Garfield Bakery. Clarrie Lindsay delivered it on Tuesday, Thursday and Saturday. Mum always ordered a Vienna loaf and this was delivered, unwrapped, and put into the letter box, which sometimes meant that if Mum and Dad had been out during the day it was a bit crusty when they took it out of the letter box a few hours later. In the 1950s, some of the owners of the bakery were the Umlaufts and the Lowndes. 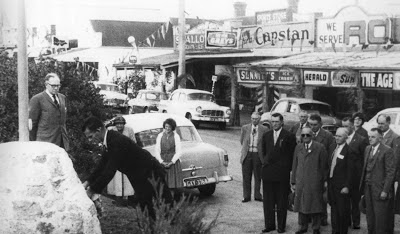 This photograph shows some of the shops in Main Street in Garfield.
It is possibly an Anzac day service as they appear to be laying a wreath, 1960s.

Mum always went to the butcher in Garfield; she went to Jimmy Fawkners, who was up near the Opp shop. She also went to Ernie Robert’s grocery shop (where the cafe is) which was a general store and also had hardware, crockery and groceries. Philip and Vera Wharington also had a grocery store in Garfield and they also stocked haberdashery.  However, around 1968 Robinsons in Pakenham opened up an experimental self service store and Mum began to shop there. Robinsons had operated a grocery store in Pakenham from the 1950s and later had the SSW store until Safeways took it over (around 1980)

Grandma, and most of the surrounding area, also had groceries and other goods delivered from Dillon’s store at Cora Lynn.  Les North, the delivery man, would come around the day before and take the order, which would be delivered the next day. The Cora Lynn store had opened in 1907 and the Dillon family took over in 1927 and operated it for decades.

* the dog was named after Grace De Lacy Evans, of Vervalac, Iona. She married Percy Pratt on June 24, 1919. Mr Pratt is on the Iona Honour Board, you can read about him and the other soldiers with an Iona connection, here.
Posted by Heather at 9:01 PM No comments:

Alexander and Agnes Mickle (nee Johnston) arrived in Victoria in October 1857 on the ship, Blackwall. Agnes was 28 and Alexander was 27. They had tried to come to Australia the year before but their boat, the Mull of Kintyre, was shipwrecked just after it had left Scotland. They both came from Berwickshire, on the Scottish border.  Alexander was the third of the Mickle brothers to arrive in Melbourne, with John having arrived in 1838 and Thomas in 1841. John Mickle, who along with his partners, William Lyall and John Bakewell, had amassed a large amount of land which they divided up in 1856. John Mickle’s share included parts of the Yallock Run, which he renamed Monomeith and Alexander and Agnes came out to manage this property.

Alexander and Agnes took a bullock dray from Melbourne to Tooradin, then went by boat to the mouth of the Yallock Creek. They lived in the original homestead until 1860 when a new house was built. In November 1861, Alexander died suddenly from appendicitis and peritonitis and Agnes was at Monomeith, eight months pregnant and with her two children David, aged 3 and Isabella Margaret, nearly 2. The only other person on the property was “the lad” John Payne, who had to ride into Cranbourne for the Police to make arrangements for the burial. Their third child, John Alexander, was born four weeks later on Boxing Day, 1861. 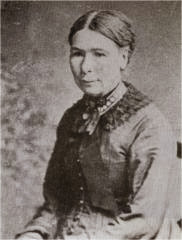 Their son, David, was the grandfather of the local historian Dave Mickle. He has written various books and was instrumental in establishing the Koo-Wee-Rup Swamp Historical Society. Dave Mickle has written about Agnes, but no where does he write about what must have been the sheer horror (or so it seems to me) of the situation that Agnes was in - alone on the farm at the Monomeith; no close neighbours; about 30 kilometres from the nearest town which was Cranbourne, which at the time was a small town with a population of 115; and two little children and a baby on the way.

The management of the Monomeith property was taken over by Andrew Hudson, who was a cousin of the Mickles. Andrew planted wheat and operated a dairy farm. Agnes married Andrew on May 17, 1865 and had two more children, Agnes Lilly, who was born in 1866 and in 1868, when Agnes was 40, she gave birth to James Johnston  (Johnston was her maiden name). Andrew and Agnes and family moved from the Monomeith property to Protectors Flats near Lang Lang, where along with the dairy farm, they also grew tobacco. In 1879, they moved to the Warook property on the Yallock Creek and built a house (not the existing Warook house) and a dairy. They leased this, on a ten year lease, from William Lyall. Towards the end of this lease they started building The Grange, in Koo-Wee-Rup. Sadly, before they moved, Andrew Hudson died suddenly at the age of 55 on August 3, 1888. Agnes, a widow once more, moved into The Grange a few months later on October 1.

After Andrew died it seems that her sons, John Mickle and James Hudson, took over the farm and they operated Koo-Wee-Rup Dairies, where they purchased milk from local farmers and made cheese, then later (after 1899) James worked on his own and milked  cows and produced cheese.

Agnes also faced the death of her two daughters, who both died within a year. Isabella Margaret had married Richard Scott of Poowong in 1886 and had six children. She died in February 1902. Her other daughter, Agnes Lilly, had a more tragic life. She married George Hook in 1899 and their first child, Isaac, died in 1905, aged 5. Their second child, George was born on February 2, 1903 and sadly Agnes Lilly passed away six days later on February 8. Maternal mortality at this time was in the region of 40 to 60 deaths per 1,000 births, this means about 5 mothers died giving birth out of every 100 births. This didn’t decline until the 1940s, largely due to the arrival of antibiotics. Interestingly, little George, was adopted by his uncle, John Mickle and his wife Laura (John Mickle being the child Agnes gave birth to, four weeks after Alexander died)

Agnes Hudson died on December 10, 1913 aged 86. Her obituary in the Lang Lang Guardian describes her as having had a long, useful and honourable life …the deceased lady who was loved and respected by those who had the priviledge of knowing her, possessed the sterling attributes of the great Scottish race whose early pioneering enterprises left such as impress on the early land settlement in the colonies…. her mind was bright and active to the close.. and her health was remarkedly good.  So this is a tribute to a remarkable pioneer woman, Agnes Hudson, who survived a ship wreck, the birth of five children, the death of two husbands and that of her two daughters.
Posted by Heather at 1:23 AM No comments: