Garfield - after the coming of the Railway

In another post I looked at the history of Garfield up until the coming of the Railway, which is really the seminal event in the history of Garfield. The Gippsland line to Sale was opened in stages - Sale to Morwell in June 1877, Oakleigh to Bunyip on  October 8 1877, Moe to Morwell December 1877, Moe to Bunyip March 1878 and the last stretch from South Yarra to Oakleigh in 1879. Originally, the only Stations between Dandenong and Bunyip were Berwick and Pakenham. The timber industry boomed after the railway and a series of sidings developed along the line to despatch timber such as Officers Wood Siding in 1881, where the Officer family sent firewood to Melbourne.  This is now the Officer Station. Around the same time, Fraser’s Siding was established to accommodate Donald Fraser’s Saw Mill and this later became Longwarry. In the Garfield area the Railway lead to the establishment of two early industries, Jefferson’s Saw Mill and brick works and the Cannibal Creek Saw Mill Company.

Joseph Jefferson established a saw mill in 1877 on the site of what was to become his clay pit, off Railway Avenue. He sent this timber out via Bunyip Station until a local siding, the Cannibal Creek Siding, was built in 1885 to accommodate the timber tramline which was constructed by William Brisbane, a contractor on behalf of Francis Stewart.  This tramline run for about 8 kilometres, to the Two Mile Creek,  the Garfield North road basically follows this tramway.  In the same year, Cannibal Creek Saw Mill Company Limited was registered in October by the Stewart family, with William Brisbane being a minority shareholder. Stewart had already obtained the saw milling rights to 2,000 acres of forest in 1883. Both Stewart and Brisbane had been involved separately and jointly in other mills and tramlines at Berwick, Beaconsfield and Nar Nar Goon.  The Cannibal Creek Saw Mill Company sounds like a very grand enterprise but apparently the Company was in trouble by December 1885, the tramline was disbanded in 1887 and the Company was placed in liquidation in 1888, however it deserves it’s place in Garfield’s history as the Cannibal Creek Siding, became the Garfield Railway Station.

Getting back to Joseph Jefferson, his was a very successful business, as well as producing timber products such as fence posts and rails and firewood, he also mined the sand on his property to be used in the building industry in Melbourne and when he discovered clay on his property he began making clay bricks. The 1880s was a boom time for Victoria and Jefferson could produce over 50,000 bricks per week and fire 75,000 at a time in his kiln. The Depression of the 1890s saw a decline in the building industry which flowed onto his business and the brickworks eventually shut down in 1929.

In the next post I will look at the growth of the township which grew around the Cannibal Creek Siding.

If you are interested in the Timber Industry, then a good book is Settlers and Sawmillers : a history of the West Gippsland Tramways by Mike McCarthy. It is published by the Light Railway research Society of Australia in 1999.
Posted by Heather at 6:32 PM No comments:

In the previous post we saw how a township developed around the Cannibal Creek Siding and this township became Garfield. One of the first public buildings was the Cannibal Creek State School which opened in 1886. The School was located on the Princes Highway, west of North Garfield Road. In 1899 the School building was re-located to Garfield Road at the top of the hill, half way between the Princes Highway and the Railway Station. In 1910 the Garfield School No. 2724 moved to a new building on its present site near the Railway Station. The old building was removed in 1914 to North Garfield where it became State School No.3489.

1886 and 1887 was a time of the consolidation for Garfield - in May 1886 the Cannibal Creek Post Office was established at the Railway Station. In the same year there was community agitation to have the name of the settlement changed.  On December 11 a petition was presented to the Berwick Shire from the ‘residents of Cannibal Creek’ objecting to the name of Swamp Vale for the name of the Railway siding and Post Office and suggesting that the place be named Hopetoun. The Council resolved to ask the Railway Commissioners to alter the name to Hopetoun.  In the end Hopetoun was rejected on the grounds that there was another Hopetoun in Victoria and Garfield was chosen. The Post Office became known as the Garfield Railway Post Office on May 16, 1887 and around the same time the School also changed its name from Cannibal Creek. Township blocks were sold in Garfield and the township of Garfield was officially gazetted on November 21, 1887. For the next few years the town developed, still relying on the timber and the brick works as a major source of employment, however Garfield also had a blacksmith, a builder and a beekeeper and some carriers. By 1888 Garfield also had a football team.

If you are interested in names then Hopetoun, the proposed named for Garfield came from Lord Hopetoun, was the seventh Earl of Hopetoun and the first Marquess of Linlithgow. He was Governor of Victoria from 1889 to 1895, and in 1901 the first Governor General of Australia. The name Garfield came from the assassinated American President, James Garfield, who was shot July 2, 1881 and died September 19, 1881. Swamp Vale naturally comes from the fact that Garfield was on the edge of the Koo-Wee-Rup Swamp. The Swamp was drained by cutting a canal from Bunyip to Western Port Bay, the Main Drain. The major drainage works took place from 1889 to 1893 when the Swamp was then considered ready for settlement and Garfield became a service centre for the Swamp residents. New businesses were established such as a baker, carpenter, saddler and even a Sweet shop run by a Mrs Williamson.

Posted by Heather at 6:32 PM No comments:

The earliest recorded European settlers in the Garfield region were the lessees of the two Connabul Creek Runs, both leased in 1845. Connabul Creek 1,of 8,960 acres, was leased by Michael Ready (or Reedy) and James Hook and Connabul Creek 2 was leased by Terence O’Connor and a Mr Hayes. Essentially, these Runs were located between the Ararat Creek and the Bunyip River, north of the Koo-Wee-Rup Swamp. Another source tells us that a Mr Thompson had the Cannibal Creek cattle run from 1845.

The term Cannibal Creek is believed to have come about because early Surveyors in the area had left their fox terrier in their camp and when they returned they found the dog had been killed and eaten by Dingoes and thus they named the creek Cannibal Creek. Another version of the name is that the word Coonabul comes from a corruption of the Aboriginal word couna meaning “forehead” and bal meaning “he” or “she”. This possibly referred to the shape of Mount Cannibal, which was thought to resemble a head. 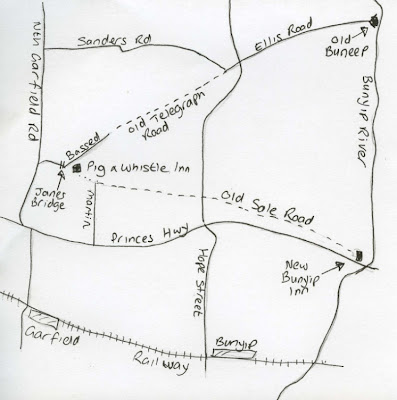 The Garfield area opened up after a road was surveyed from Dandenong to Gippsland in 1847 along the edge of the ranges and when this proved to be impassable in places, a new road, which became the coach route, was surveyed in 1859. This went through Cannibal Creek, via the old township of Buneep and onto Crossover. The Melbourne to Sale telegraph line followed this route in 1865, which eventually gave the road the name of Old Telegraph Road (see map).  Where this road crossed the Cannibal Creek, a small settlement was surveyed in 1860 and the township of Cannibal Creek was born. In 1866 Jabez Janes established the Pig & Whistle, on the south side of Cannibal Creek.  According to a public notice in The Argus of December 21,1866 Jabez applied for a Beer Licence in my house of five rooms finished and others partly built. He was granted the licence, however a year later he was declared insolvent due to the falling off of business in consequence of the Government changing the line of road between Cannibal and Shady Creeks. He had debts of £192 pounds. Three years later Jabez, who was described as a beer-seller at Cannibal’s Creek was back in the Courts again, when he was charged with deserting his de facto, Mary Anne Goldsmith, with whom he had five children, and leaving her and the children without support  He was ordered to pay support and put up a Surety of £20. The Argus goes on to report that as the man had neither money nor friends to assist him he was sent to gaol.  The next licensee of the Pig & Whistle was Mrs Kathleen Leeson. Mrs Leeson died in 1910, aged 100 years old. Kathleen and her husband Robert had selected land at Cannibal Creek in the early 1860s.

Competition for the Pig & Whistle came with the establishment in 1867 of David Connor’s New Bunyip Inn. This was built on the Bunyip River on the Gippsland Road, as the Princes Highway was then called. The coach route then changed direction at Cannibal Creek and turned south east to this Inn, and became known as Old Sale Road (see map). A small settlement developed around the Inn, including the establishment of a bakery by William Snell. However, Garfield really took off with the establishment of the Railway, which we will look at in the next post.
Posted by Heather at 6:32 PM 3 comments: