The Cheese Factory at Cora Lynn is  a prominent landmark, and as you can see by the date on the factory, it was established in 1910. This photograph was taken in 1998 and it has since been refurbished. I have tried to find out the exact date of the opening, but can only conclude from the following newspaper reports that it was either December 1910 or January 1911. The factory was extended in the 1930s and in 1932 had around 500 regular suppliers, however it was closed in the late 1940s. 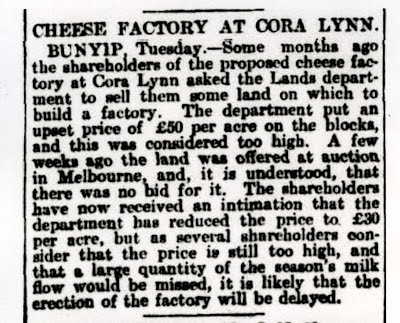 Tenders were accepted in October 1910 to build the factory.

The Argus Saturday, October 15 1910 page 20
From Trove http://trove.nla.gov.au/newspaper
The Factory was under construction in December 1910.

The factory had just been completed in January 1911.