I wrote this article for the Koo-Wee-Rup newsletter, The Blackfish.  It is a companion piece to the one I wrote for the Garfield Spectator 'A trip from Dandenong to Garfield' which you can read here. They both start off the same at Dandenong.

Let’s imagine we are travelling by horse and coach down the South Gippsland Highway (also known as the Western Port Road, the Bass Road or the Grantville Road) from Dandenong to Lang Lang in the 1800s - what hotels would we encounter on the way? We would have the need to call in to some of these hotels to get something to eat and drink for both ourselves and the horses. The journey is about 50km or 30 miles so even going by Cobb & Co coach which was a ‘fast’ and relatively comfortable service with modern coaches which had a suspension system made of leather straps,  it was still a four hour  journey as the coaches travelled at about six to eight miles per hour. The horses were swapped every ten to thirty miles.  So we’ll start  our journey at Dandenong which had a large range of hotels -  Dunn’s Hotel and Dunbar’s Dandenong Hotel were both built in the 1840s, the Bridge Hotel and the Royal Hotel in the 1850s to name  a few. 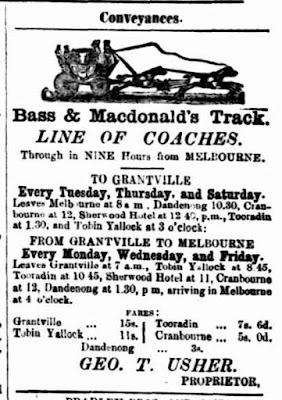 An advertisement from the South Bourke & Mornington Journal from February 14, 1877.

The next hotel I could find was run by Mrs Fagan on Lyndhurst Hill, where the ABC Radio station was later built (the triangle of road formed by the intersection of the Highway and Hallam Road). Mrs Fagan, who arrived in Victoria in 1853, was a survivor of a shipwreck. The ship she was a passenger on, Earl of Charlemont, went down off Point Henry near Geelong in June 1853. All the passengers were rescued but they lost all their possessions.  Mrs Fagan started the hotel in 1857 after her husband, Alexander, died at the age of 65. Her establishment was said to have dispensed the ‘water of life’ to coach drivers and she and her daughters were said to have a reputation for generosity and kindness. Who was Mrs Fagan? She was born Sarah Jones in Northern Ireland and married to Alexander Fagan. The two daughters referred to were Sarah, who married George Hall in 1855 and Agnes who married Mr Nelson - that’s all I know about him. Apparently, Sarah Hall used to walk from Narre Warren to Dandenong, even when she was 80, so she was an energetic woman. I don’t know when the Hotel ceased trading, nor can I find out when Mrs Fagan died.

After leaving Lyndhurst we travel to Cranbourne where there were two hotels. The Mornington Hotel (on the same site as Kelly’s Hotel) was started around 1860 by Thomas and Elizabeth Gooch, who like Mrs Fagan, were also survivors of a ship wreck. Thomas had been sailor and was on the Sacramento, which was wrecked off the Port Phillip Heads. He had met Elizabeth who was a passenger on the Sacramento - they both lost everything in the ship wreck, but found true love, as they married in 1854 and had eight children between 1855 and 1867. By 1912, the Hotel was known as the Motor Club Hotel and in 1919 it was taken over by the Kelly family. The existing Kelly’s hotel was built around 1926.

The Mornington Hotel at Cranbourne
(Photo from The Good Country: Cranbourne Shire by Niel Gunson)

The other hotel in Cranbourne, called the Cranbourne Hotel, was established in the early 1860s by Robert and Margaret Duff. It was located next to Clydesdale Square, where the Cranbourne Park Shopping Centre is. Robert Duff died at the age of 34 in August 1861 ‘from being driven violently against a tree by his horse’ as his death notice in the paper said. He was the brother of the Reverend Alexander Duff, the first Presbyterian Minister in the area. Margaret’s maiden name was also Duff, so I presume she married a cousin, not unusual in those times.  Margaret continued to run the Hotel after her husband’s death and in 1866 married Edward Tucker, who owned a store in Cranbourne. The Cranbourne Hotel was demolished in the 1970s. Duff and Tucker Streets in Cranbourne are named after these people.

The Grantville coach at the Cranbourne Hotel at Cranbourne
(Photo from The Good Country: Cranbourne Shire by Niel Gunson)
Continuing down the Highway, we would have come to the Sherwood Hotel, in Tooradin, which was near the corner of the South Gippsland Highway and Tooradin Tyabb Road. It was built around 1870 on land owned by Matthew Stevens. The Sherwood Hotel and 258 acres were put up for a mortgagee auction on March 14, 1878 and it is thought that the Poole family purchased the hotel at this time. The Poole brothers, Frederic (1826-1894), George (1827-1909), and Thomas (1837-1906) were early settlers in the Cranbourne area. Frederick was elected to the Cranbourne Road District Board and later the Cranbourne Shire, he lived at Lyndhurst. Thomas lived at Lang Lang and it was George Poole who became publican at the Sherwood Hotel. The ground of the Sherwood Hotel had a large stable, a diary and milking shed and the Pooles milked forty cows. George also constructed a racecourse and bred horses. When the Melbourne Coach refused to stop at his hotel, he built himself a Coach, which met the Cranbourne train and travelled on to Grantville.  George Poole had left the Hotel sometime before 1906 and after that there were a series of Licensees. The Sherwood Hotel was deprived of its licence on December 31 1917, after a ‘Deprivation Sitting of the Licenses Reduction Board’ hearing.

The next hotel was the Bridge Hotel at Tooradin. In January 1870, John Steer applied for a Beer Licence for his Bridge Inn and when he died in May 1876 the Hotel was taken over by Matthew Evans. Later publicans included Larry Basan who took over the licence in 1888 and rebuilt the hotel in 1895 and sold it around 1900. The hotel was demolished in 2016. 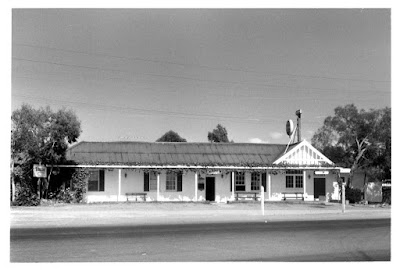 We have to detour off the Highway for the next Hotel which is the Royal Hotel in Koo-Wee-Rup built in 1915 for Denis McNamara. It was officially opened on Thursday, September 9, 1915.  A report in the Lang Lang Guardian at the time described it as a ‘fine commodious building of nearly 30 rooms’ and ‘one of the finest edifices of the kind in Gippsland’.

Back out to the Highway and continuing down to Lang Lang was the town of Tobin Yallock on the corner of the Highway and McDonalds Track. The town started in the mid 1870s with a Church, a general store and Post Office and eventually had a drapery, bootmaker, bakers and Mechanics Institute Hall.  In 1877, the Flintoff family built the Tobin Yallock Hotel. The Tobin Yallock township declined when the Great Southern Railway was constructed and the Lang Lang Station opened in February 1890. By 1894 most of the businesses and public buildings had transferred to the new settlement near the Lang Lang Railway Station. In 1893 the Flintoff family built the Lang Lang Coffee Palace near the station.   The building later acquired a liquor licence and was renamed the Palace Hotel. The original building burnt down in May 1933 and the new Palace Hotel was built on another site (where it is now) and opened in June 1934.
Posted by Heather at 4:20 AM