The Iona Hotel at Garfield was originally opened around April 1904. It was built by George Ellis. A report in the South Bourke and Mornington Journal of April 13, 1904.said that hotel will become a favourite resort for holiday seekers and sportsmen as within a short distance from the town are to be found numerous fern gullies and caves of marvellous beauty and for those who are in quest of game the surrounding country will be found all that a sportsman wishes, whether it be with the gun or fishing rod. The report goes on to say that the Hotel stands on a prominent site and is of very pretty design, presenting a throughly up to date appearance. The hotel had twenty nine rooms including the bar room, parlours, commercial room , dining rooms, drawing rooms, billiard room with a full sized Alcock's table and fixtures and sixteen bedrooms. The building was constructed of weatherboard and had gas lighting and an 'excellent' septic sewerage system. There was also substantial stabling.

Sadly, the hotel was destroyed by fire on April 23, 1914. I believe the existing Hotel was erected the next year as there is a report, once again in the South Bourke and Mornington Journal this time from May 27 1915 saying that the Shire of Berwick Health Inspector, Dr H. White, had inspected the Iona Hotel and he was pleased with the appointments and sanitation of the place and that no expense had been spared by the proprietors to make it all respects one of the best equipped hotels in the colony.

In 1907, George Ellis sold the Hotel to Thomas O’Donohue who was connected to Martin O’Donohue who built the Picture Theatre in 1924. In the four years that Ellis owned the Hotel the Net Annual Value of the site had risen from £75 to £125 (Shire of Berwick Rate Books) which is an indication of the growth of the town. Ellis and his family was farewelled from the town at a function at the Hotel in September 1907 and Mr Ellis was praised as a charitable and respected man who was always doing his part to advance the district. Mr Louch then presented Ellis with some gramophone selections and Mr Hattersly presented him with a set of pipes which he trusted would bestow great comfort during hours of worry and that they would remind him of his friends left behind in Garfield.(Reported in the South Bourke and Mornington Journal of September 11,1907). 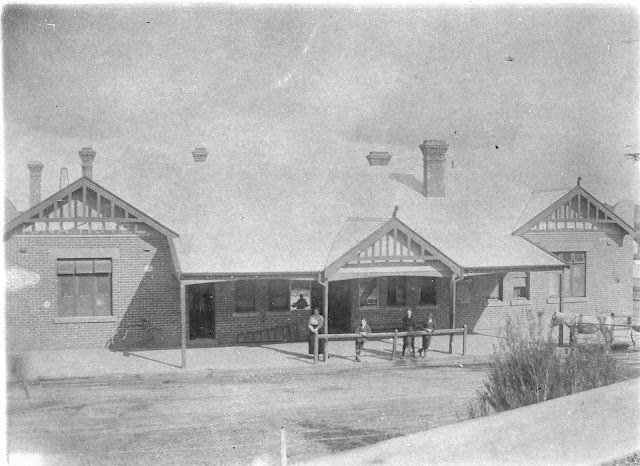 This photograph, from the Berwick Pakenham Historical Society collection, shows the Iona Hotel, most likely just after the new building was opened in 1915.
Posted by Heather at 4:36 AM