William Lyall and the Acclimatisation Society

William Lyall, the owner of Harewood, on the South Gippsland Highway, introduced deer to his property in 1868. Lyall was an enthusiastic member of the Acclimatisation  Society which was started in Victoria  in 1861.The object of this Society was the introduction, acclimatisation, and domestication of all innoxious animals, birds, fishes insects, and vegetables, whether useful or ornamental ; - the perfection, propagation and hybridisation of races newly introduced or already domesticated; - the spread of indigenous animals, &c. from parts of the colonies where they are already known, to other localities where they are not known. (The Argus February 26, 1861, read full article, here) 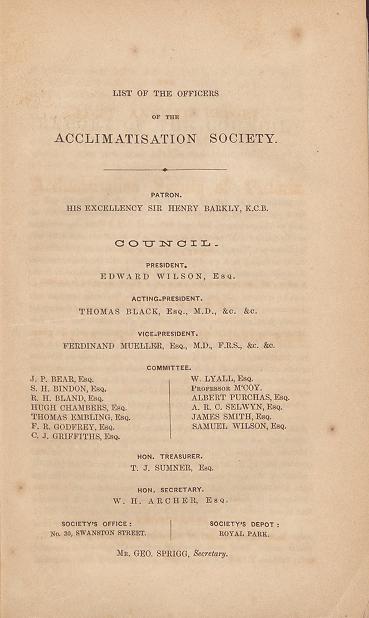 From the First Annual report of the Acclimatisation Society,  1862, listing William Lyall as a Committee member.
https://www.biodiversitylibrary.org/bibliography/141530#/summary

William Lyall also introduced other species to his property including partridges, pheasants and hares. The following is a report of William Lyall’s attempt to introduce hares and the casual manner in which some early settlers sought to eradicate native fauna to protect the introduced species.

Hares. — Mr. Lyall, of Frogmore [Carnegie], turned out some English hares a year or two ago on his property at Western Port. The spot he selected lies between the shore of the bay and some cultivated ground. About the spot there is plenty of clover in the form of low bushes and tall grass and solsolaceous plants. Since the hares were first turned out they have been occasionally seen, have bred, and have also appeared to be thriving well. We regret to learn, however, that an enemy, has lately attacked and killed one or two grown ones. This is a species of hawk, which either strikes them when running or darts down upon them. We should like to know what hawk it is for there are very few here large enough to attempt anything of the kind. The Australian eagle commonly called an "eagle-hawk" has been known to stoop and carry off kangaroo rats, &c, and we suppose it is this bird which has killed Mr. Lyall's hares as it is also often very destructive to young Iambs.

Strychnine is the best remedy, and in many parts of the colony it has been so much used in that eagles are not so numerous as in former years. The best mode of applying it is this - Place the skinned carcase of any dead animal on an open piece of ground that it may be seen easily; score the fleshy parts with a knife, making the cuts within half an inch of each other, and sprinkle into them a few grains of strychnine crushed to a fine powder between two pieces of writing paper. We have seen five or six poisoned a single day. (Freeman’s Journal April 5, 1862, see article here.)

Hard to believe that you would kill a wedge-tailed eagle, they are so magnificent to watch. I was going to say that they were different times then, but there was a case last year where a man was charged with poisoning over 400 eagles in East Gippsland, so sadly, it still happens.

This is a letter, written to the Acclimatisation Society, from William Lyall about his success with some of his introduced species.
Yallock, Sept 29, 1865.
Dear Sir - A sight of the Sambur deer has just put me in mind of my duty to the  Society - that is, to report progress. The animals entrusted to my care have, l am happy to say thriven remarkably well. The three does have three fine fawns, and all are in fine condition. To-day, a doe and a buck were enjoying themselves by taking a swim in a waterhole—indeed, they appear to be fond of the water: so much so, that I am bound to believe that swamps must be their natural habitat. I feel certain that all the islands in the great swamp will, in time, become stocked with the magnificent Sambur deer. At present there is rally one of the bucks (the youngest) remaining with the does: another has taken possession of the garden here, and a very bad gardener he has proved himself to be, I propose having him taken over to join the does in the swamp, where he will he out of harms way. I believe that this part of the colony is, perhaps, better adapted for a home for the pheasant than any other part of Victoria. If the council will send a few down, I win take charge of them.
My hares are doing well and are spreading over the country.
Wishing the society every success, believe
me, dear sir, yours very truly.
WILLIAM LYALL.  (Australasian, October 7, 1865, see letter, here)

A report in 1919 said that deer are to be found in the scrub around Koo-wee-rup
Swamp and Lang Lang, but they are scarce now, having been thinned down by settlers. (The Argus, March 21 1919) There are still plenty of hares around, we have heaps of them at Cora Lynn, which I guess we can ‘thank’ Mr Lyall for.