These great photos (the colour ones), courtesy of Neville Clark, are of Hugh Bourke, off-loading cattle at Monomeith Railway Station. They had been sent from Casino in New South Wales. There was an article in the Koo Wee Rup Sun of April 26, 1967, about the shipment.  Neville thought it was 760 head of cattle, the paper quoted 731, which ever is correct, that is a lot of cattle.  I have transcribed the Koo Wee Rup Sun story. 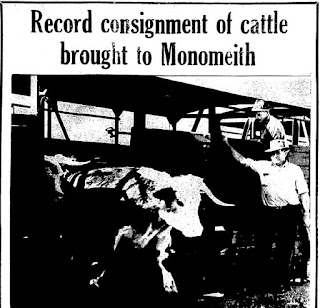 From page 1 - Record consignment of cattle brought to Monomeith
Cattle made the news this week when a record shipment of731 head arrived at Monomeith in a  53 car special train. The cattle had been bought in Queensland by Mr Hugh Bourke and their arrival created somewhat of a flutter in the local community.  See story inside.

From page 3 - Off-loading 731 cattle at Monomeith Station
A record consignment of 731 head of cattle, transported on a special train of 53 stock cars arrived at Monomeith on Monday afternoon. The cattle had been purchased two weeks ago by local graziers, Mr Hugh Bourke and his son, Mr David Bourke at sales in southern Queensland.  The cattle travelled over 1000 miles by the time they had arrived at Monomeith.
It was by far the biggest consignment of cattle to come to this area and was also the biggest one train load.
The cattle were loaded at Casino. They had to travel upwards of 20 miles on foot before undertaking the long rail trip to Monomeith.
It was certainly a memorable sight to see the big diesel pull into the Monomeith station hauling 53 trucks. A large number of people were on the station to see the operation completed.
An inspection of the cattle, mainly Herefords, revealed that they were in remarkedly good condition.
The cattle were unloaded in three lots, the same as they had been purchased. Each lot was driven up to the Bourke property to begin the term of fattening for the Melbourne market.
Mr Hugh Bourke says the operation of buying cattle in 1967 was quite a business and involved quite a deal of air travel. On this buying trip he had been accompanied by his son David and Mr Stan Teague from Younghusband & Co. Mr Teague inspected all the cattle prior to the sale.
Mr Bourke said that he purchased the first lot of over 300 cattle and left to attend another sale by air. The remaining four hundred odd head were purchased by David.
On the trip the cattle were accompanied by big Bill McCormick and his nephew Mr Peter McCormick from McCormick and Co. Livestock agents from Casino.
Mr Bill McCormick had the touch of the big outback about him, but he was the essence of efficiency and had complete control of the operation.
The Bourke family at Monomeith have landed two prior shipments of cattle from the north at their property. The first was of over 300 head and second one was over 500 head. 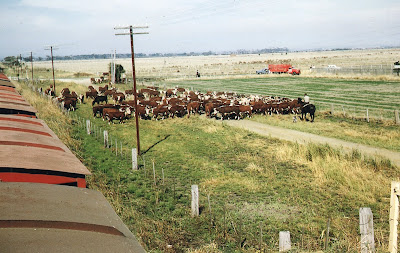 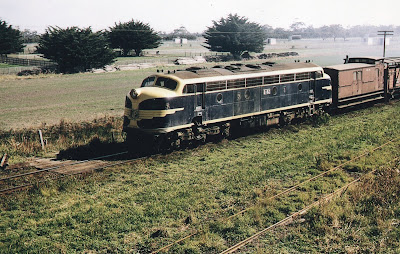 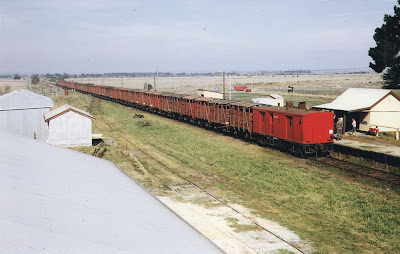 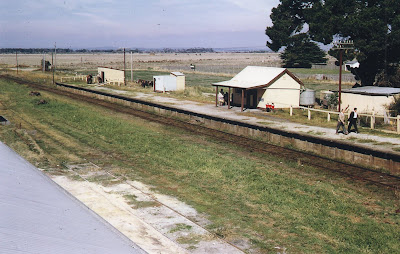