What happened in Garfield in 1912

This is a look at what happened in Garfield  one hundred years ago in 1912. These references are taken from various papers on-line at  http://trove.nla.gov.au/newspaper

The headline for an article in The Argus on February 19 was Boisterous potato diggers.  The article says that there are many potato diggers in the area at present and that two of them had been drinking  during the day and had created a disturbance in the Main street.  Blows were exchanged between themselves and a manager of a store and a  stone was hurled through a shop window. Constables Anstey and Ryan made several arrests.

In May, Jefferson Siding was closed. The Siding was between Garfield and Bunyip and used mainly for bricks and firewood. (The Argus May 9, 1912)

In July, three cases of Diphtheria were reported in Garfield. Dr Oliver visited from Pakenham and decided that Mr Rileys home was the centre of the outbreak. He also ordered that the School be closed for one week for fumigation and cleaning.  Diphtheria could be fatal and in 1912 257 Victorians died of the disease. (South Bourke & Mornington Journal August 1, 1918)

On July 13, The Argus reported that Lennon Brothers Circus performed in Garfield and a windstorm arose and wrecked the tent. The audience which was not very large was uninjured and showed not the least sign of panic or confusion beyond the wailing of a few young children at being plunged from a glaring light to absolute darkness.

In December, the license for the Iona Hotel was renewed at a sitting of the Dandenong Licensing Court. The licensee, F.A Carrroll had to pay the assessed fee of £75.00. As a comparison the fees for the Gippsland Hotel (Top pub) and Stacey’s Railway Hotel at Bunyip were both £55 as was the fee for the Nar Nar Goon Hotel. The Pakenham Hotel (near the Railway Station) was  £100 but Bourke’s Hotel at Pakenham (on the Highway next to Toomuc Creek) was £45. (South Bourke and Mornington Journal, December 19 1912)

However, the most unusual thing that happened in Garfield in 1912 was in the October when a Beer Strike took place  The story goes that the hotel keeper decided to increase the price of pints of beer from four pence to six pence.  A meeting of beer drinkers was held to protest against the increase and it was unanimously agreed  to abstain from beer  until the price returned to four pence. Anyone  found paying six pence would be fined £1.00.  This was reported in papers as far away as the Cairns Post, The Adelaide Advertiser, The Worker (which was a Brisbane paper) and the Broken Hill Barrier Miner. I am not sure how true the story is or  how this issue resolved itself. 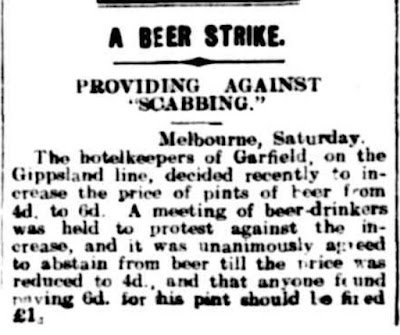 
This article is from the October 19 edition of The Barrier Miner, which had an interesting headline, as you might expect from a newspaper from a strong union town.
Posted by Heather at 2:23 AM

Email ThisBlogThis!Share to TwitterShare to FacebookShare to Pinterest
Labels: 1912, Garfield, What happened in Garfield 100 years ago