The first article I wrote for the Garfield Spectator in 2010, was a look back at what happened in the town 100 years previously (read it, here) I thought that was such a good idea, I started doing the same for Koo Wee Rup for The Blackfish, so this is the first Koo Wee Rup article on that theme.

This is a look at what happened in Koo Wee Rup and surrounds in 1910.  Most of these references are taken from The Argus, on-line at  http://trove.nla.gov.au/newspaper.

In March, at a sale of Crown land at Koo Wee Rup -  two 20 acre allotments sold for two pounds, ten shillings per acre. Four other five acre blocks sold for five pounds per acre. There was a report in July about the State revaluing land held by settlers from the Crown There are in all some 800 settlers on the swamp. The board which had charge of the matter investigated the cases some time ago. Its method has been to take the length of time a man has been working a property and the amount he has expended on it, and to consider both these important points in arriving at the value of the land. The price was originally fixed when land had a fictitious value. It is on record that a Koo-wee-rup block at the time of the "boom" brought something like £40 per acre, while others realised £20 and £30. Some time after that the State thought £10 an acre was a fair price for some of the best land, and this price was fixed, while other blocks were appraised as being worth £9, £8, £7, £6, and a few as low as £2 per acre.
By the time the settlers had to  clear the land, maintain drains and farm the block many were facing financial hardship so they were granted relief by having the land re-valued and some had their payments suspended. (The Argus, March 2, 1910 and July 23, 1910. I have quoted from the July article, you can read the full article, here.) 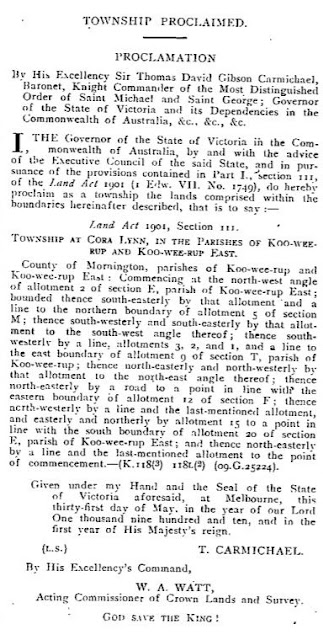 The township of Cora Lynn was proclaimed on May 31 and the Cora Lynn Cheese Factory opened in December of 1910.

The Koo Wee Rup State School was moved into the township, to Rossiter Road, from Bethune’s Road.  A tender for the removal of the school was advertised in February 1910 and the school opened in Rossiter Road in the September.

Locally, the town of Wonthaggi was proclaimed on September 14. The town and the associated coal mine was good news for the Koo Wee Rup Swamp - The opening up of the Powlett coalfield has provided a new and profitable market for produce grown on the swamp. Tons of potatoes, onions and chaff are being despatched to Powlett from the Koo-wee-rup station at frequent intervals. (The Argus May 30, 1910)

In November, the Yannathan Butter Factory was turning out six tons of butter per week, up from 3½ tons at the same time the year before. (The Argus November 12, 1910)

Finally, we will end on a sad note. In February, a body was found in a bag in the water at Tooradin. The victim had been seen before in the township of Tooradin and he was camped near where his body was found. When the bag was pulled from the water, a hand was protruding from a hole in the bag. This led to speculation as to whether it was murder or suicide, as the victim could well have tied the bag himself. An inquest, two days later, returned the verdict of suicide. The body was not identified, however it was said that he was of  'the swagman class'. (The Argus, February 12. The Coroner's inquest is reported in The Argus of February 14 - it is quite interesting about how the  body was found, how the man was living before his death, but sadly no evidence as to the identity of the man. Read the article, here)
Posted by Heather at 3:49 PM

Email ThisBlogThis!Share to TwitterShare to FacebookShare to Pinterest
Labels: 1910, Koo Wee Rup, What happened in Koo Wee Rup 100 years ago