This is a look at what happened in Koo-Wee-Rup and surrounds, one hundred years ago, in 1912. These references are taken from various papers on-line at http://trove.nla.gov.au/newspaper

In January, Mrs McKenzie, who had been Head Teacher at the Koo Wee Rup State School for the previous 22 years was entertained in the Hall, prior to her departure to Moolart, where she had been transferred. Over 100 people attended the function and were entertained with performances by her previous students amongst other amusements. Mrs McKenzie was presented with a book of Shakespeare’s poems and a purse of sovereigns (South Bourke & Mornington Journal, January 25 1912)

The South Bourke and Mornington Journal reported that on Saturday, February 17 the Pakenham Magistrates Court was crowded with onlookers to hear the case between two Koo-Wee-Rup residents, William Himbeck and Matthew Killeen. Himbeck had accused Killeen of assault and using bad language. Several witnesses were called from both sides and the evidence given was very contradictory. The paper reports that some witnesses heard very bad language indeed, whilst others heard only the pure Australian accents undiluted with profanity. The Bench found Killeen guilty and fined him £1 for the assault with 28 shillings in costs and five shillings for the bad language with 20 shillings in costs. So all up that was £3 and 13 shillings; a fair bit of money at the time as the average wage for a factory worker was about £3 per week and for a man employed under the Rural Workers Award the weekly wage was £2 10 shillings.

The South Bourke & Mornington Journal of July 4, reported that a concert was held in the Koo Wee Rup Hall with 300 in attendance to raise funds to build a shelter shed at the School. £16 was raised and a dance was held after the concert. The shelter shed was built by John Colvin and completed in October.

On July 5, which was Arbor Day, nearly all the residents of the district turned up at the State School with their horses, carts and spades and planted 50 trees at the School and they laid out the teachers garden and the school garden, planted hedges and erected fences. The ladies of the district provided lunch and afternoon tea. The report goes on to say that a new school building is badly needed as the existing one is too small to accommodate the sixty children.  A new Koo Wee Rup State School building was erected in 1915 and burnt down in May 1950.  The original building had been erected in 1884 between Koo-Wee-Rup and Bayles and relocated into Rossiter Road in 1910 relocated again in 1919 to become the Dalmore East School (No.3925) later known as Island Road School. Island Road School closed in 1974 and the building was relocated back to Koo-Wee-Rup, and became part of the Primary School. (The Arbor Day event was reported in the South Bourke and Mornington Journal on July 11, 1912)

On July 16, the School was closed by order of the Health Officer, Dr Harkness, as three children were suffering from diphtheria. Diphtheria could be fatal and in 1912 257 Victorians died of the disease. (Report from the South Bourke and Mornington Journal of July 25, 1912.)

In September, the Railway promised to erect a small sheep and cattle yard at the Station. Locals had complained that the nearest livestock loading yards were at Monomeith, five miles by road. (The Age, September 4, 1912) 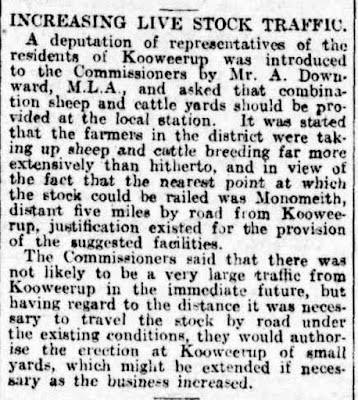 A report in the South Bourke and Mornington Journal on October 10, said that the London Bank purchased the land on which their premises stood. Whatever their original premised were, they were obviously demolished as the existing building (the A.N.Z Bank) was built in 1919.

On November 26, The Argus reported that the passenger platform at the Koo-Wee-Rup Railway Station was lengthened to accommodate the new longer trains and in December a new train was added to the timetable - a Goods train with a passenger carriage attached.  This would leave Koo-Wee-Rup at 6.50am daily and meet up with the Warragul train at Dandenong from where it would leave at 8.57am, eventually arriving in Melbourne at 10.04am. In comparison to today, three hours to get into town isn’t too bad. In 1912 you would have had time for morning tea at the Dandenong Railway Station Refreshment Rooms, which had been built at a cost of £750 in 1908 and there would have been a clean, functioning toilet at the Station - so compared to getting stuck on the Monash Freeway for hours, it sounds like a great alternative. (The report on the extra train comes from the South Bourke & Mornington Journal of December 5, 1912)
Posted by Heather at 9:45 PM

Email ThisBlogThis!Share to TwitterShare to FacebookShare to Pinterest
Labels: 1912, Koo Wee Rup, What happened in Koo Wee Rup 100 years ago