What happened in Garfield in 1915

This is what happened in Garfield in 1915, 100 years ago. These references all come from digitized newspapers available on Trove, http://trove.nla.gov.au/newspaper  There were many references to the War and the soldiers who enlisted and served, but this is a look at the non military activities in the town.

January 14 - The Iona Hotel had been completed. This new brick building, replaced the old wooden building which had burnt down. The new building cost £8,500, contained 30 rooms and is without doubt one of the best and commodious houses of its class in Gippsland. (Dandenong Advertiser)

January 14 - Mr Henwood was unfortunate enough to have a dairy cow run over by a train. Needless to say, the cow was severally damaged. (Bunyip Free Press)

February 26 - Many papers reported on the misadventures of Charles Gregory of Garfield. Charles had climbed the weight tower of the air-gas plant of the Iona Hotel, and remained at the top for some time and then jumped to the ground, a distance between 30 and 40 ft (9 to 12 metres) His thigh and elbow were broken and his head was considerably battered.  He told Constable Anstee that he had been ‘studying astronomy’ but when he saw the moon fall, he thought ‘discretion the better part of valour and he jumped to prevent it falling upon him’. (The Age) 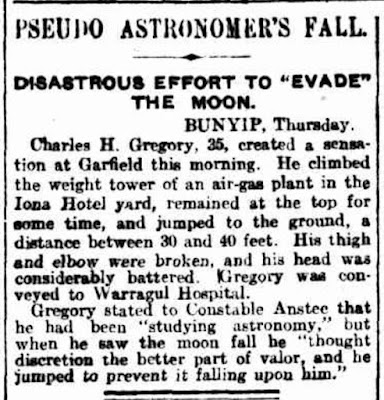 March 18 - On St Patrick’s Day eve two men came across a man lying on the road with his face considerably bruised. They drove him to the Bunyip Police Station and left him with Constable Anstee. The man later explained that he had been ‘keeping up’ St Patrick’s Day, obviously beginning early. Constable Anstee allowed him to go home without having to answer to the common charge of being drunk.  (Bunyip Free Press)

May 13 - Constable Anstee gave evidence at the Bunyip Court against Edward Heffernan a ‘young man from the city.’ Heffernan was charged with using obscene language. Anstee deposed that the accused was in front of the Iona Hotel and was using very bad language (sample produced). He was fined 20 shillings or 7 days imprisonment. (Bunyip Free Press)

June 24 - Harcourt’s store at Garfield was burnt down. It was a drapery, grocery and general store. All the contents were destroyed apart from a tin of kerosene and a few bags of chaff. On the same night the Railway Station was broken into and it is thought that the same people were responsible. The stock was valued at £400.00 and the building at £250.00 (Bunyip Free Press)

July 29 - Constable Anstee arrested William McMillan at Iona. McMillan was proceeded against at the Carlton Court by a resident of Garfield for the maintenance of an illegitimate child. It was ordered that McMillan should pay 10 shillings per week, provide a surety of £80.00 or else face three months imprisonment. After his arrest he was conveyed to Melbourne to undertake the prison sentence. (Bunyip Free Press)

September 30 - An energetic committee has control of the Garfield Hall - a new lighting system was introduced and the interior had been generally improved. (Bunyip Free Press)

October 7 - Constable Anstee was busy again – he arrested Charles Joseph Lyons at Garfield on a charge of horse stealing. Lyons’ tracks had been followed up for 20 miles by the’ Dandenong black trackers’. Lyons had driven the horses from Koo-Wee-Rup, across country to Ringwood where they were sold. He also had stolen a horse from Croydon. (Bunyip Free Press)

December 2 - This is a lesson for everyone who runs a Post Office.  The Bunyip Free Press reported that ‘for some year residents of Iona obtained their mail at Kirwans’ store. Since Mr
Kirwan was fined for selling liquor without a license the Postal authorities have removed the post office to the residence of Mr Clark’.

December 16 - Constable Allen took up residence in Garfield as Officer in Charge of the district, so I presume Constable Anstee had been appointed somewhere else. Constable Allen had been at Bunyip for a few months and was married in Portland on December 7, so he was bringing his new bride back to Garfield. (Bunyip Free Press)

Email ThisBlogThis!Share to TwitterShare to FacebookShare to Pinterest
Labels: 1915, Garfield, What happened in Garfield 100 years ago