This is what happened in Koo Wee Rup and surrounds in 1915, 100 years ago. These references all come from digitized newspapers available on Trove, http://trove.nla.gov.au/newspaper  There were many references to the War and the soldiers who enlisted and served, but this is a look at the non military activities in the town.

The year started off with an arrest -  Elizabeth Allen, a resident of Fitzroy, was arrested on warrant by Constable Anstee on Mr. Strafford's farm, Iona, on Tuesday. Allen and her husband band were digging potatoes on Koo-wee-rup Swamp and she had a serious quarrel with another married woman named Ellen Fielder on Tuesday morning. It is alleged that Allen went into the house occupied by Mrs. Fielder, and pulled her out of bed on to the road by the hair. Mrs. Fielder issued a warrant, and Allen was locked up on a charge of assault. She was admitted to bail, and will appear to answer the charge to-day  (The Argus January 7, 1915)

On January 8, the Wonthaggi Licensing Court granted  Denis McNamara a licence to operate a Hotel in Koo Wee Rup. This Hotel was named the Royal Hotel and opened in Koo Wee Rup on September 9, 1915. There were six applications to open a hotel at Koo Wee Rup, you can read about them, here.
(Powlett Express, January 15 1915)

On February 24 the Lang Lang Guardian reported on a severe storm in Yannathan. The storm was described as unprecedented.   All day the weather had been threatening, and thunder showers which visited other parts of the district left this locality untouched. But at about 4 o'clock, while about 30 ladies and gentlemen were witnessing a cricket match in Mr Stewart's paddock between the Lang Lang and Yannathan teams, a densely black cloud, lit up constantly by vivid flashes of lightning, was seen approaching from the south-west. When the first drops of rain fell players and spectators left the field for the shelter of the Mechanics' Hall, and while there the storm burst, and for about ten minutes the elements were in almost indescribable tumult. A hurricane blew jinkers about the hall yard, and everything in the shape of boxes and loose timber was lifted by its violence. Then something in the nature of a cloud-burst descended, and rain and pieces of ice fell in such density that looking across towards the Union Church, only a shadowy outline of the building could, be seen, and the hall yard was soon under water. Deafening peals of thunder and constant flames of lightning combined with the downpour, and twice the crash of a falling tree was heard. The door of the church being opened, all made a dash from the hall and entered, but were drenched in doing so. As suddenly as it broke, the storm abated, and very little rain fell during the remainder of the afternoon.
Sadly, the storm also caused a fatality - seventeen year old Don Cameron, who was employed by Mr W.H. Gardiner, of Yannathan. He was working in a paddock was struck and instantly killed by lightning. His parents were from Beaconsfield and he was buried at Berwick Cemetery.

On March 3, the Lang Lang Guardian had a report headlined 'Tramps at Koo Wee Rup' - For some years past residents of the Swamp have complained, without any remedy being applied, of the great nuisance of tramps camping at the bridges and frightening horses. An example of the real danger of this habit was given on Saturday morning last, when Mr R. Glen was conveying a load of potatoes in a dray, and when at Mallcotl's crossing the horse shied at a couple of tramps camped at the bridge; with the result that the dray was capsised and the potatoes tipped into the drain. Mr Glen was thrown out of the dray and was badly shaken, but it was wonderful that be did not sustain severe injuries. 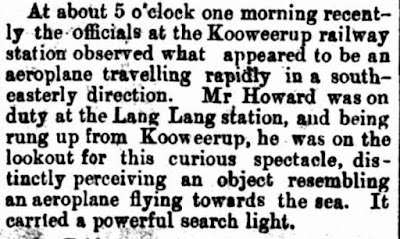 In April there was an unusual sighting of an aeroplane flying over Koo Wee Rup - see the report above.

In July a 'Plain and Fancy Dress Ball' was held at Koo Wee Rup. The successful ball was a fund raiser for the Red Cross. Over 220 people attended the ball at the Mechanics' Institute (Hall) and £22 was raised. You can see a list of some of the participants and how they were dressed, here, in the Lang Lang Guardian of July 28, 1915.

Constable Anstee was busy again in September, when he along with Constable Allen seized a large quantity of whisky, beer, and stout in cases from the store owned by John, A. Kirwan at Iona. The report goes on to say that for some time the police have suspected that there was trafficking in liquor at Iona, and they watched the store owned by John A. Kirwan. They saw a man leaving the store with a bottle of whisky, and he admitted to the police that he obtained the liquor at Kirwan's. Kirwan was charged with having trafficked in liquor illicitly. (Dandenong Advertiser September 23, 1915) Kirwan's store was actually at Vervale (Main Drain Road south and Fourteen Mile) and was taken over in 1916 by James and Edith McMannis, read about this, here.)

We will finish with this report about a 'Cinematograph' entertainment at Yallock held on November 25. A cinematograph is a motion picture film camera, which also serves as a film projector and printer. It was invented in the 1890s in Lyon by Auguste and Louis Lumière - according to Wikipedia.

Email ThisBlogThis!Share to TwitterShare to FacebookShare to Pinterest
Labels: 1915, Koo Wee Rup, What happened in Koo Wee Rup 100 years ago